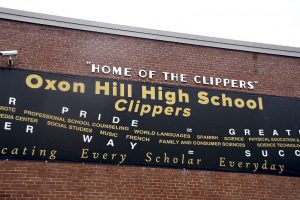 I just read an interesting story about two Oxon Hill High School graduates who were not allowed to speak at their commencement ceremony and more particularly the certitude of right and wrong in the comments below the story.

More information might well become available but what I find incredibly striking about the story is the lack of information. Basically, we know the two young women were told a few days before the ceremony they weren’t to speak. There is no reason given for them being left out of the Oxon Hill ceremony although it is implied they were, at one point, on the schedule. This might not be true, it’s just implied.

Meanwhile an Oxon Hill school board member who was speaking at the commencement told the young ladies they could have some small amount, thirty seconds, of his time. Then, before the ceremony, the girls were told they couldn’t give a speech but the message was perhaps unclear as there were two possibilities, their original speech or the short period offered by the other board member. In the confusion, they went on the stage and the microphones were cut off. Confusion reigned. They tried again and again the microphones were cut off. Finally, the principal told them they could not speak at all.

The Oxon Hill board member who ceded some of his time is apparently in some sort of feud with the principal and other members of the school board. It’s possible the students were going to speak out for him although much is left to doubt.

Therein lies my problem. There is one group of people calling out for the firing of the principal and the school board members. Another group is calling the two young students entitled little brats who can’t follow rules.

It’s quite clear to me that neither assumption is supported by the facts as we know them. Most people seem to simply leap to conclusions based upon the result they’d like to be true. As a nation, even as a world, we seem to largely be living, and happily so, with conclusions that are not based on strong evidence.

I am encouraged by the fact I made a comment on the article expressing these thoughts and it has gotten quite a few thumbs up.
Still, it’s discouraging seeing the vehemence of those calling for heads to roll, be they the kids or the principal and board member. There just isn’t enough evidence currently available to justify a strong conclusion one way or the other. I’m sure more will eventually be known but that doesn’t change the facts, or lack thereof, in the current story.

Not only is it discouraging but it’s rather baffling. One of the things that drives my entire persona is that I hate to be wrong. Many people mistake this for a need to be right and I understand the confusion. I try to avoid conclusions until I’m in possession of enough facts. It’s mystifying to me that so many people are willing to take such a strong stand when there is no possible way to know if they are right or not.

I feel as though I’ve hopped into my Prius and somehow ended up in the Kingdom of Wisdom. If only, like Milo, I could find my way back to the real world.