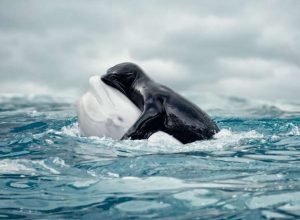 A photo of what appears to be a Beluga Whale and a Southern Fur Seal apparently hugging one another spread across social media much like a wildfire. It’s a fake news photo. I’d like to spend a little time analyzing why so many people loved the image and viewed it as some sort of harmonious moment in an ever more tumultuous world, and how this relates to the more dangerous phenomenon of fake news.

To toot my own horn for a moment, I saw the picture myself and immediately guessed it was a fake. Believe me if you will, I have no evidence of my opinion. I’m quite sure most of the people who believed the photo to be real, or at least suspected it was authentic, are now of the opinion they knew it was a fake all along.

Anyway, a few days later when the image was definitively proved as a fake, it hit the news again. A lot of people are apparently upset. The artist herself, Elena Vizerskaya, has a webpage where she creates many fake photos. It was from the site it spread so quickly through the internet.

Why did people believe the image? Why are they so angry it turned out to be a digitally created? I think that’s a fascinating subject for discussion.

It’s a sweet image. Two animals apparently embracing. We humans like to anthropomorphize animals; that is to say, we like to think animals display the same sort of behavior patterns as we humans. When we hug another person, it is a sign of affection. When two creatures of different species do the same, we see some sort of metaphor in which the world can be a united and better place. If a seal and a whale can love each other, why can’t we?

We want the world to be like this. Where everyone gets along and there is harmony and joy. Thus, when we see an image that seems to validate this desire, we are inclined to give it more credence than is deserved. This is called a Wishful Thinking Fallacy. Wouldn’t it be wonderful if the picture was true gives way to the conclusion the picture is true.

We run into this way of thinking virtually every day, and it leads us to faulty conclusions. The people who truly believed the photograph then create a world for themselves in which the photograph was real. When the person so believing is given strong, or even irrefutable, evidence the original photograph was not real, we often see one of three results.

One group of people will continue to assert the photo is real. They will deny the evidence of the website finding some excuse to continue with their belief. Perhaps the photo is real but being denied because the government has a secret program going onto move Southern Fur Seals from the Antarctic to the Arctic. Certainly, President Trump or former President Obama would be the instrument of this conspiracy.

Another response is to accept the new evidence and feel betrayed, lied to. This group of people is furious at those who they perceive wronged them. They will lash out violently, with words at least, and probably blame one of the two aforementioned presidents at some point or another in their rant.

The third possibility, and the one usually in least abundance, is that people thus mistaken laugh, shake their heads, and admit they were rather silly to believe such an obviously fake photo. Sadly, there aren’t very many people in that third group left in the world.

Thus, we see the photograph as a microcosm of all the Fake News in the world today. It seems to me people have largely succumbed to the Wishful Thinking Fallacy when it comes to political decisions. I think most people do not do this when dealing with business and personal choices that have an immediate impact on their life. But when it comes to politics, we seem perfectly happy to accept any reality that matches what we want for this world.

It is only when we develop the ability to laugh at our mistakes that Fake News will lose its power. I’m not holding my breath.