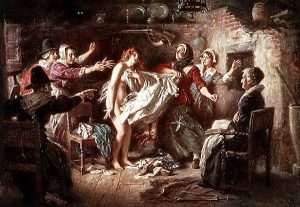 The idea of a Witch Hunt is much in the news lately and I realized I didn’t really understand the origin of the practice. Off I go to find out more. Now, to be clear, I’m not talking about the modern usage in regards to politics but the ancient usage wherein people were accused, tried, found guilty, and murdered by the hundreds of thousands for doing something they could not possibly have done. If you aren’t fascinated by that, well, stop reading.

Witch Hunts date back throughout recorded history and likely beyond with the Code of Hammurabi being the first written instance of legal remedies. The code commands throwing the person who has had a spell cast upon them into the river. If they don’t drown, the person accused of casting the spell should be killed.

The impetus for a Witch Hunt, which we see widely across the globe in a variety of cultures, seems to be straight-forward enough. If misfortune befalls someone we look for a reason behind this occurrence. It is largely the same when fortune favors someone. We humans are pattern finders extraordinaire. We see shapes in clouds and rock formations. We look for cause and effect in virtually all aspects of our lives and this serves us exceedingly well for the most part.

Sadly, pattern recognition also leads us to see associations that don’t exist. If I lived in the middle ages it’s quite likely I would imagine that exceptionally crazy, er, passionate, girl at the gym to whom I am attracted to like a moth to the flame but who is currently in a relationship with some other poor sap was under some sort of spell. After all, how could she be remotely interested in someone besides me?

If I lived in Ancient Babylon I would throw myself into the river, first taking a few swimming lessons and taking a trial run or two, and, having survived, would have her current beau put to the fire while I took his house and hopefully her love. Win!

Interestingly enough, in ancient Greek there were no Witch Hunts but the Romans were not so logically inclined and persecuted and murdered those thought to cast evil incantations or spells. This was curtailed, believe it or not, by the introduction of Christianity. The Old Testament has the famous Exodus passage thou shall not suffer a witch to live but early Christians frowned upon witchcraft as it was considered blasphemous to suggest people could cast spells. Let nobody presume to kill a foreign serving maid or female servant as a witch, for it is not possible, nor ought to be believed by Christian minds.

By the late middle ages this sensible approach was abandoned when witchcraft was determined to be a result of Satanic Worship. Those people who worshipped the devil were, in fact, capable of casting evil spells. After this various European communities went through periods where the Witch Hunt was common and at least tens of thousands of people were put to death.

By the 18th century such murders were dying out in the western world although are still taking in certain places in Africa, South-Central Asia, Papua New Guinea, and Saudi Arabia. People are still executed in all of these places.

The lesson to be learned from all of this? To me it’s fairly obvious. Just because something happens that doesn’t have an obvious explanation is no indicator of a supernatural cause. As an Atheist, I’m willing to go further. There are as many people of casting malevolent magical spells in this world as there are gods. That is to say, none.