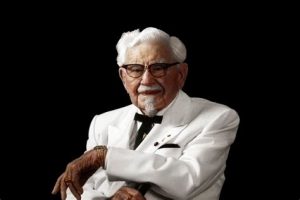 An interesting story making the rounds these days involves the founder of the Papa John’s Pizza chain, John Schnatter, who assumes Colonel Sanders was a racist. This assumption appears to me to be based solely on the fact that the restaurant chain Sanders founded, Kentucky Fried Chicken, is from the south and that Colonel Sanders was therefore clearly a racist who must have often used racially charged language.

From everything that I can find about Colonel Sanders he was a plain-spoken fellow who didn’t hesitate to criticize and had little good to say about the changes that took place at Kentucky Fried Chicken after he left. While owner he was known to push food onto the floor in surprise visits to chains if it didn’t meet his standards.

Yet I can find nothing indicating he was a racist or ever used derogatory language to describe minorities. That’s what I find so interesting in all of this. Schnatter seems to be under the impression every white man from the south is a racist. He figured, well, Colonel Sanders is from Kentucky, by the way he’s from Indiana, and he was a white man, so he probably said terrible things and got away with it. I find that to be a disgusting insult to not only Sanders but to fine and decent people all over the south.

Yes, there are racists in the south and in the north as well. The assumption itself sheds light onto the character of Schnatter and also brings to mind a deeper issue we have in this country as a whole. People from the rural areas often assume people from urban areas are ill-mannered and irreligious. People from urban areas often think people from rural areas are uneducated and overly religious. People from southern states think people from northern states hate them and vice versa. People who are Democrats think Republicans are stupid and vice versa. None of these assumptions are true.

People are individuals which is, to some degree, the heart of Libertarian beliefs. I cannot and will not assume anyone is anything until I have seen them speak, read the words they have written, or spoken to them. A person’s geographic location does not define her or him.

It seems to me more and more people are unwilling to make the effort to understand other individuals and, because it is simple and easy, lump them into some negative category so they can dismiss them.

There are huge numbers of wonderful people all over this world and artificial divides created by those who profit from our hate keep us apart from one another. These assumption about each other prevent us from finding friends with whom to share our lives. All these assumptions are a terrible shame.

Screw you Schnatter and screw your assumptions.