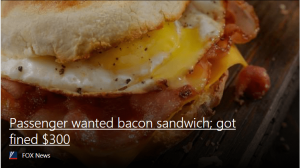 Plane passenger who wanted bacon sandwich fined $300 reads the headline from Fox News but the reality is somewhat different. Ronald James refused to buy lunch for his daughter while at the airport hoping the airline would feed her for free. The didn’t.

He refused to accept the answer given to him and insisted on speaking to the captain of the flight. When refused he harassed and physically menaced flight attendants for a good portion of the flight. These are not allegations at this point, James pleaded guilty and has been fined.