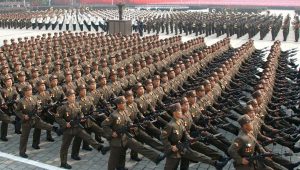 A rather common refrain I hear from people is the idea of using nuclear weapons to completely destroy a particular enemy of the United States. I probably first heard this in regards to Iran not long after the revolution in that nation, today I mostly hear it in reference to North Korea.

The idea is that North Korea doesn’t have the ability to damage the United States in return and they do not have resources we’re much interested in acquiring. If we simply use nuclear weapons on them we don’t risk any soldiers’ lives and solve the problem.

But what does saying something like “Turn North Korea into a parking lot” indicate about the person saying it? I think it’s fairly important to examine this idea. I’m of the opinion that most people are saying it rather flippantly, they are not really thinking through the idea nor do they actually want the plan carried out. Still, it’s important to consider your words. When you say something, other people hear you. People who respect and trust you often repeat your sentiment. It’s one of the ways fake news gets legitimized. When someone you respect gives an opinion, you are prone to believe it and repeat it.

So, let’s examine the consequences of turning North Korea into a parking lot by using nuclear weapons.

North Korea is a nation of nearly twenty-five million people. It has a land mass of forty-six thousand square miles. It is adjacent to U.S. ally South Korea and important trade partner China. It is less than a thousand miles from central Japan.

In order to completely destroy North Korea, the U.S. would likely have to drop hundreds of nuclear bombs. We could destroy the major population centers and military institutions with fewer but it would require a considerable effort in either case. We could attempt to bomb when prevailing winds would minimize the drift of the nuclear cloud. Most likely we’d kill, maim, and radiate hundreds of thousands, if not millions, of people in Japan, China, and South Korea in collateral damage.

In addition, North Korea has considerable artillery assets which are well within range of Seoul. They would almost certainly bombard much of South Korea before the full effects of the nuclear attack could be achieved.

Obviously, we’d be killing the vast majority of the population in North Korea; man, woman, child, and unborn infant. For me that’s an issue of simple ethics, morality.

In addition, we would be establishing a pattern of behavior where we are willing to completely destroy an enemy. This has a two-fold effect. Proponents argue it would frighten our enemies, who would immediately come into line with our desires. There might be some truth to that but the reality is our enemies would simply plan to completely destroy us before we could do the same to them.

I’m not saying you should or shouldn’t want to flatten North Korea. I’m just suggesting you consider the consequences of such actions before you advocate them. What doing so would infer about your own humanity and decency, the effects your spoken and written sentiments have on those around you.