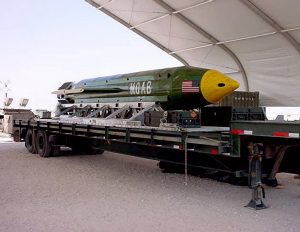 Since I wrote this article, sources in Afghanistan are claiming that three caves were destroyed and 94 militants killed. I’m rather skeptical of this total seeing as no one has yet to clear the area and United States sources are silent. That being said, it that is true, then what follows is apparently incorrect.

The GBU-43/B is the wrong weapon to attack caves and people supporting its use are coming up with contrived arguments to prove the value of the strike. I think it’s important to use the right tool for the job and optimistic hope that a shovel can pound a nail still doesn’t mean the shovel was used properly. Do we really want our military running on hope and using the wrong tools?

I’ve been in a number of discussions on various social media outlets about the effectiveness of the GBU-43/B against protected fighters in Afghanistan. The issue has largely been the GBU-43/B is designed as an Air Blast weapon to clear soft targets from the surface and to explode mines over a large area. Its very name indicates as much, Massive Ordnance Air Blast (MOAB).

The United States military has a number of other weapon systems called Massive Ordnance Penetrators (MOP) which are designed to penetrate caves and bunkers to destroy their targets.

The problem here is the caves are not a single target but a massive complex and the MOP can only strike a small portion of them. Meanwhile, the MOAB does affect a much larger area but only on the surface, not caves.

What I’d like people to think about is the design purpose of the GBU-43/B, the way it was used in Afghanistan and, most importantly, why and how they are defending the strike.

It’s my opinion that people are defending the strike because they support aggressive action against enemies of the United States holed up in the caves of Afghanistan. I don’t begrudge them this attitude. What I’m suggesting is that we should pound a nail with a hammer, not a shovel. I’m also saying it’s counterproductive to support people pounding nails with shovels. Tell them they are doing it wrong. Give them a hammer.

If you saw your enemy spending considerable effort in making attacks that were useless would you be frightened by the inarguably massive power of the attack or emboldened by the sheer stupidity of the misused weapon?

Most of the arguments I’m getting from supporters is the concussion of the blast might destroy tunnels below ground. This is true. It’s unlikely, but possible the force of the air on the surface might collapse a small section of the tunnels directly below the blast. The vast majority of the force goes sideways and destroys targets on the surface, as is the design parameter of the ordnance.

Basically, people are arguing the shovel is a good pounder of nails when it clearly is not. This because they want to support the strike. Again, I get you support the attack. I’m just suggesting that we use the right tool for the job.

If you have to contrive an argument to support your point, well, your point might not be so valid. Something to consider.