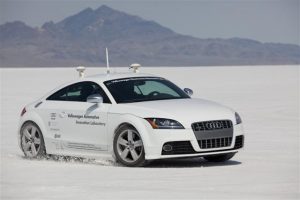 I’ve long been a proponent of Autonomous Cars, or as they are often called, Self-Driving Cars. When I try to argue for them I generally get a lot of resistance. Some people don’t want to give control of the car to a machine, which they feel less able to safely navigate the roads. Others feel the cars are likely to have their computer systems hacked.

Both of those things are fairly unlikely but I really want to discuss the many and varied benefits of autonomous cars for all of us. The arguments I present here really aren’t going to promote the march toward such vehicles. The cars are coming and there is nothing to be done about it.

One of the major benefits is simply an enormous savings in money of law-enforcement expenses and the transfer of such assets to criminal, rather than traffic, duties. That is to say we’ll save huge amounts of taxpayer money. Autonomous cars won’t make illegal turns or exceed the speed limit. They will follow the restrictions of the software, which will be to obey the law.

Another huge savings in tax dollars will be on emergency services. Autonomous cars will get into accident far less frequently than human driven cars. This means hospital services will decrease dramatically. Doctors will have much more time to deal with sick patients, not accidents victims.

More tax dollars will be saved on construction and maintenance of road signs and signals which will be unnecessary.

Your insurance payment will be reduced by the amount of liability you are paying. You will not be responsible for any accidents.

People unable to drive will be able to move about their communities as desired.

Handicapped passengers will be dropped at the front door of their destination and picked up at the same spot at a time of their convenience.

There will be no more intoxicated drivers on the road

Some fifty-thousand lives will be saved in the United States every year.

The land devoted to parking lots will be greatly reduced. Autonomous cars will deliver a passenger to the front door of a location and then motor off to park in huge lots built off the beaten path. This will create a network of shops and businesses in a much smaller area and allow the greening of your community with more parks and other amenities.

These cars will increase productivity as passengers will perform their work while commuting from their origin to their destination. In addition, the travel time from points will be reduced dramatically as the cars will be able to travel at far higher speeds than a human can manage and also in herds, thus avoiding the stop and go of normal traffic.

Security measures will prevent your car from being stolen by anyone other than an identified driver.

You will be far less stressed. Driving is, without question, the most stressful thing I do.

Travel will be increased as any destination within eight hours can easily be reached while the passengers sleep. This will lead to the closing of many small airports which are largely supported by tax dollars. Thus, yet another saving for taxpayers.

You may not like the idea of an autonomous car but your children will never learn to drive. And, in this man’s humble opinion, that’s a wonderful thing.

One thought on “The Benefits of Autonomous Cars”