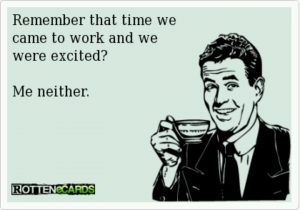 Yep. That’s the world I want to live in. A world where no one has to work.

Now it’s important to define what I mean by work. Work is what we do to make money. Not labor we perform. I’m a big believer in doing things, achieving things, building things, and general accomplishment. I think those are the things that make us happy. That being said; I think the general idea of unemployment is completely backwards. Economists, real ones and the armchair version that posts on Facebook and comments sections of news articles, are all wrong. Completely and totally wrong.

100% unemployment is the goal we need to seek, not 5% or whatever economists call healthy. We need machines to do all the work. We should be thrilled when they take away our jobs.

Imagine a world in which machines do all the labor and people are free to do as they please, that you have eighteen hours a day to be with your family, to be with your friends, to pursue your hobbies. What would you do? Work? No. Achieve at a never before seen level? Yes.

Again, it’s important to distinguish the idea of work from the idea of accomplishment. If I didn’t have to work I wouldn’t sit idly eating food. I’d go to the gym more often. I’d write more novels. I’d play more video games. I’d play more Dungeon and Dragons with my friends.

The question on your lips is one with which I’m familiar. Who would make the video games? Who would get the food?

It would be a combination of automated robots and people who like doing those things. There are many tens of thousands of people out there working on video game projects because they enjoy it. They release them as Open Source Freeware. Just as my novels would be free for all to enjoy. Farmers largely enjoy their labors. They love growing the food and knowing it is feeding people. It gives them great fulfillment, as well it should. Sure robots would do a lot of that but there are plenty of people in this world who love  doing things. Not necessarily working but achieving.

When people are free to achieve all day long why would you imagine productivity would go down? I’m going to write about the End of Money tomorrow but for the moment imagine you don’t have to make money to survive. Would you just sit around all day doing nothing? Perhaps a few among us would do so but I think the vast majority would use that free time to pursue productive ends. They would learn new languages, gather with friends to make music, improve their bodies and minds.

Imagine a world with 100% unemployment. I do.