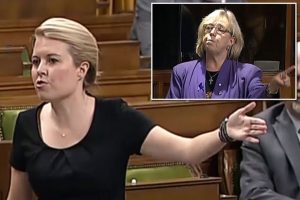 There’s a silly news story making the rounds that gives me an opportunity to ask you a question, so I’m going to do it.

Politician Michelle Rempel said the word “fart” in regards to how the province of Alberta was being treated by the Canadian Parliament. The leader of the opposition party, Elizabeth May, thought the word lacked decorum and called out Rempel. A war of words ensued.

What I want to examine is the idea that the word itself has no meaning at all to most people. It is the person who says it. Let’s pretend you have no idea what political parties Rempel and May represent. You simply know Rempel said the word fart in a place where normally one uses decorum.

I want you to think introspectively about yourself and your past behavior when answering this poll. Don’t immediately answer. Think about it. Then give me an answer.

Thus, I guess I’m saying most people I know will lie in order to support their political agenda. And they will do it with little awareness they are lying. They will tell their lie and believe they are telling the truth. Worse even than the means justify the ends. Lying supports the party I like and therefore it is the truth.

It’s my opinion this is where we are as a country, not just in Canada.

Finally I will discuss my opinion on the controversy although I hope you answer the poll before reading.

Rempel was in violation of simple decorum but not enormously, it was an impassioned speech. May was out of line in publically attacking Rempel. She should have simply pulled her aside quietly and suggested that such language is probably not best in parliament. Perhaps Rempel might have stood up the next day and explained that her passion carried her away and that she is sorry for her choice of words if not for the message. Maybe even have thanked May for pointing it out. Then May might have reciprocated explaining that she understood and heard Rempel’s message. That they might try to work together to solve the problem.

But then again, I’m just a silly dreamer who thinks we are headed toward Utopia.