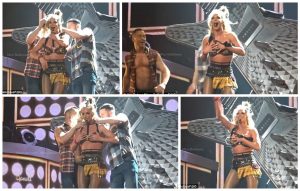 About the only place I get entertainment news is when I’m watching television at the gym and for the second time I’ve got a heartening Britney Spears story to talk about.

To put the news fully into perspective I think it’s important to know a little bit of history about Spears. She earned great success at 18 years of age with the hit song … Baby One More Time. This success brought her fame and fortune and all the good and bad attendant in those double-edged blades. By the age of 26 her life was beginning to unravel in a number of ways including drug addiction.

I’m not big on passing judgment. We’re all adults and responsible for our actions. Money and fame at a young age is not always easy to handle and many succumb to various temptations. Many are never able to recover. Spears made a mess of her life and she is responsible. Eventually her father took control of her finances and various other aspects of her life.

She is now performing in Las Vegas on a regular basis and that’s what this story is all about.

Spears suffered what is now called a wardrobe malfunction. Her top all but came off. It is quite likely there were many people in the audience who came to Las Vegas specifically to see Spears sing. Losing your top on stage in front of a large audience cannot be called anything other than traumatic. Spears handled it like a seasoned professional. She clutched her top to her chest and kept singing. Two of her dancers helped her button back up. The top malfunctioned again. Spears again went on with the show while a backup singer literally gave her the shirt off her back. She continued to sing throughout.

Now I’m sure many people will point out backup music was likely playing and Spears could probably have stopped for a moment with no serious repercussions. That’s certainly true but it makes no difference to my eyes.

She knew there were people in the audience who paid their money to see her. They traveled great distances to see her and she wasn’t going to let them down, even if it meant they got to see a little more of her than decorum would normally dictate.

I’m not a big fan of popular music but her spirit of professionalism is a shining example to everyone in all walks of life. The show must go on. Well done, young lady. Well done, indeed.

One thought on “Britney Spears Getting it Together”