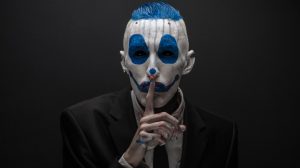 Sometimes it’s just too much and a Libertarian wants to throw his arms up in the air and scream, “Take it. Take this country and do what you will. You’ll be begging for help not long after I get out of your way and let you have what you want. Take it! Take it all.”

Clowns. Clowns! For the love of the Flying Spaghetti Monster, Clowns!!

I suppose not everyone has heard about the rash of clown sightings sweeping the western world. People dressed in clown costumes have apparently committed a few crimes and sightings of many more scary clowns have been reported although not substantiated.

Legislation that prevents people from wearing a costume?

Sheer idiocy replacing any sense of rational thought, reason, the Constitution of the United States.

Freedom. Anyone heard of it?

Target has the right to stop selling clown suits, it’s their business, it’s stupid but they can do as they want. When there are actual laws against dressing in a clown suit then something is seriously wrong with this world.

Rant, rant, rant, rant, rant. Who cares. No one is listening. Safety has surpassed freedom. People will give up big freedoms and little ones for the illusion of safety. We’ll see how safe you are when you get what you want. Don’t come crying to me.

One thought on “Clown Ban in Kemper County Mississippi”