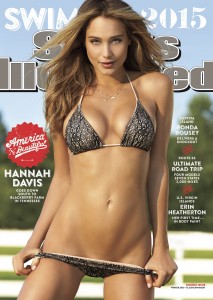 There’s apparently a big controversy about the latest Sports Illustrated swimsuit edition cover picture which shows a model named Hannah Davis pulling down her bottoms so that they almost, but not quite, reveal her genital region.

The reason it is causing such a stir is because it is apparently a little too sexy and some people think that Hannah is degrading herself by posing in such a fashion. Davis states that she finds the experience to be empowering in this article and there are nearly 7,000 comments indicating a great deal of interest in the story.

The argument that she is degrading herself generally seems to be that because she is using her beauty to titillate the target audience of the magazine she is essentially betraying all the women who through tremendous efforts gained many freedoms for women. Freedoms like voting and being able to practice medicine or law.

First off, let us not fool ourselves. The cover is designed to arouse. Davis is an attractive young woman with a figure that inspires lust. She is not on the cover for any other reason.

The real question becomes if Davis is degrading or empowering herself. To answer this we must look at the historical role women played in the world and the place they now have in nations where women are still treated as objects. The reality is that throughout history women were largely objects to be owned by men. They derived most of their power through their influence over devoted husbands and loving sons.

The underlying reason for this lies in the simple and undeniable fact that women both give birth to children and provide them with sustenance for the first years of life. This meant that women could not participate as actively in activities of the tribe. Their mobility was handicapped by being pregnant or caring for a child. This began to change very recently and the advent of safe and reliable birth control was certainly the most important factor in the emancipation of women. There is no doubt that strong and capable women fought long and hard for more rights in the world as well and they deserve much credit also.

Is Davis trying to recreate a world where women are once again treated as chattel? I don’t think so. It’s my opinion that she is the beneficiary of all the work done by her predecessors. In nations where women are treated as property they are not allowed to use the allure of their faces and bodies to make their own money. Davis makes a lot of money. She can do with her life what she chooses, not what any man tells her. Because of her financial success she is more free than am I. She is, in a word, empowered.

There is no doubt she is empowered by the money she gets from working as a model but the next question is if she is degrading herself by doing it. It is a legitimate question. Do I degrade myself when I beg my boss for forgiveness when perhaps I wasn’t to blame for the original mistake? If I apologize to a client for their error in order to keep the job? What if a client asked me to serve cocktails at their office party while wearing almost nothing in order to get a job? I think it’s quite fair to characterize such behavior as degrading.

People can and do use their money to lure others into degrading behavior. That such behavior is despicable there is no doubt, but we cannot pretend it does not happen. Is Davis degraded in that cover picture? Is she degraded elsewhere in other magazines, other photo-shoots?

My opinion is no. She seems to be in control, not being controlled. She seems to be enjoying herself. She seems comfortable with her own body. No one appears to be coercing her into doing the modeling. To me it is not the nature of the image itself so much as the power in which she whose image is on the cover feels she has. A young woman kidnapped from her family and forced into such a pose would be degraded. A woman with little money and babies to feed who was lured into a photo-shoot in which she was coerced into showing far more of herself than she desired would be degraded.

Davis, not so much. Good for her. She is comfortable in her appearance. Confident in her figure. She makes a good living doing something she enjoys. That’s empowering. If only the rest of us were so lucky.

One thought on “How is a Bikini Empowering for Hannah Davis?”