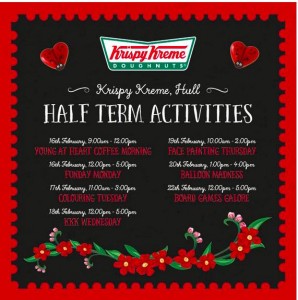 Today I take up the gauntlet of political correctness with a news story coming out of the United Kingdom and a Krispy Kreme story that ran a, shall we say interesting, promotion.

A Krispy Kreme store in Hull, England ran the Krispy Kreme Klub promotion as a way to attract patrons to the store where they would get to decorate their own donuts. Little did the store owner realize that those three letters used as an acronym are often associated with something besides donuts. It is England after all where the KKK (Ku Klux Klan) are not particularly well known. The store is now apologizing for the promotion and everyone seems to be taking it as a simple misunderstanding.

What I’d like to talk about today is the more underlying nature of political correctness. Is it the responsibility of every advertisement to make sure they don’t offend at all times? Should people apologize if they inadvertently make an insulting reference. If the word retarde means behind in French but something else in English should they not use it in advertisements? If a slang word means something different than its literal translation does that mean the pizza advertisement that uses it is in the wrong? If the word naughty has two meanings should we demand it not be used in a child’s Halloween costume?

How thin have our skins become? How little provocation does it take us to start a boycott, demand an apology, fight for what is right? All it takes is a small minority to complain and the business is happy to apologize. The idea is that they have nothing to lose. If they apologize and say it was inadvertent then they gain some goodwill. Refusing to apologize doesn’t get them any sales and I think a lot of times that’s a shame. I think we shouldn’t have to apologize all the time, particularly when the offense is so minor and largely meaningless.

Does anyone think that a doughnut shop in England is having a KKK rally? And even if they did that would be their business. I certainly wouldn’t patronize their store any more but that’s as far as my power goes.

I don’t think this is a huge deal to be honest but I don’t understand all the rage over something so silly. Sometimes I think the business owners should stand up and say there’s nothing wrong with what we did. Get over it.