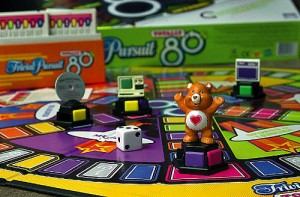 When I was younger I used to play everything to win. That was the goal and I had more than a bit of a temper when things didn’t work out. As I got older that was supplanted by a desire to simply have fun.

I’m increasingly coming to the conclusion that this attitude, while quite healthy for me, is also very annoying to some people. Let me explain.

I was invited by a friend to partake in a Trivial Pursuit, 80s version, night of game playing. We divided up into three teams and I’m happy to say that those on my team pretty much had the same attitude as me. It’s nice to win and we certainly did our best but the main goal was to banter about the strange questions, eat the delicious food, drink the nice drinks, and generally have a good time.

Members of another team were a bit more serious about winning and, unfortunately, my team was winning and their team was losing. My attempts at good humor which sometimes gave clues as to the answer to the third team did not go over well with these opponents. My team bantered about the questions and tried to deduce answers even when it wasn’t our turn and this further annoyed certain opponents.

I certainly understand their point of view. In my youth, when I thought winning was more important than having fun, such an attitude among my fellow competitors was annoying to me as well.

I’m of the opinion that our attitude is healthier. I think when it comes to games it’s better to put having fun ahead of winning. Not that you shouldn’t always do your best. I always try my best but I’m not worried about losing if things don’t go right. I’m actually of the opinion that the desire to win and the ability to have fun are inversely related. The more we make winning paramount, the less fun we have. Winning is not the fun part of the game, playing is.

That’s not the point of my blog today. I absolutely think it’s true but the question I wonder is if, perhaps, I should be more attuned to those who want to win and repress my attitude, at least a bit. If my bantering and casual regard for winning annoys those around me, am I not diminishing their fun?

Isn’t the point for everyone to have fun? I can’t be responsible for the entirety of their experience to be certain, but it is also clear my attitude does effect those around me. I was annoying several of my fellow competitors.

Should I tone it down a bit in deference to them?

As a side note I would like to point out that, contrary to popular belief, it is largely women who seem to take winning at games much more seriously than men, at least as adults. That is clearly a subjective and anecdotal opinion.

Anyway, if you have an opinion I’ve got a couple of polls for you to fill out. Let me know!

One thought on “Playing not to Win Annoys People”