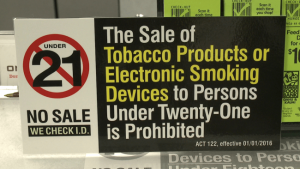 It’s wearisome being a Libertarian at times and when I read that Hawaii raised the age required to smoke or purchase cigarettes to 21, I sadly shook my head.

What’s the point of writing yet another blog about how passing such laws creates serious problems and solves nothing? The War on Drugs. Prohibition. Laws against a particular type of weapon. I suppose I could launch into a dissertation on the law of Supply and Demand but you already know about that.

Everybody, on the two main sides of the political spectrum, already understands. Republicans know that laws banning particular weapons hurt more than they help. Democrats know that passing laws against particular brands of drugs cause far more damage than the problem the purport to solve.

Everyone already knows. They know in Hawaii that their stupid ban won’t work. Then know it will cause more problems than it solves.

So why do we continue to see more and more laws? Why is it becoming increasingly difficult to lead your life free of threat from arrest by authorities?

I could rage against the prison for profit system. I could tell you how local governments make much of their money not from direct taxes but from issuing citations to their citizens. But you already know all that. I could tell how the police state puts more power into the hands of despots who love nothing more than telling other people how to conduct their lives. How such laws don’t make us safer, how they don’t protect our precious youth, how they endanger all us, how such policies embolden and empower our real enemies, despots, not terrorists.

Yes, terrorists can kill some of us and we need be wary of them but despots can destroy all the freedoms we enjoy. The more laws created to keep us safe the more power we hand to despots who slowly take our freedoms.

But, again, you know this. I cover no new territory. I make no stunning revelations.

An eighteen year old adult can choose whether they want to smoke a cigarette on their own. They don’t need a nanny state to save them from themselves. You know this. You absolutely know this is true.

I have some questions, but not just for the Hawaiian legislature, for you.

Why do want to control the lives of other people? What is the true motivation behind that desire? And finally, would your life be better and more fulfilled by focusing on doing the things you want to do and letting others do the same?

It’s 2016, the start of a new year. Today, January 1st, do what you want to do and don’t worry so much about everyone else.

I’ll do the same. I won’t let my weariness stop me. I’ll write my blogs because I enjoy writing them. I’ll write my books because I love the sense of accomplishment I get from doing it. I’ll ask out that intelligent and interesting woman I met. I’ll play Dungeons and Dragons and Trivial Pursuit with my friends. I’ll be kind to family and friends.

Happy New Year to you all.

One thought on “Hawaii Raises Age to Purchase Cigarettes to 21”