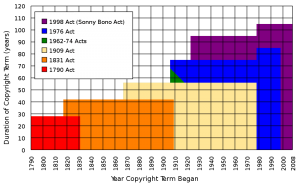 United States, you’ve done it to yourself.

A woman named Edith Newlin wrote a poem in 1937. The Willis Music Co. published the poem in a book called Songs for the Nursery School that same year. Seventy years later the producers of a television show called the Big Bang Theory got permission from Willis Music to use those lyrics as a song in their show. They did not get permission from Newlin or her estate.

Newlin died in 2004 but her daughters are now suing.

I’m a writer and I believe those who create intellectual property own it and should have the exclusive right to make money from it for a period of time. The Copyright Clause of the United States Constitution reads as follows: To promote the Progress of Science and useful Arts, by securing for limited Times to Authors and Inventors the exclusive Right to their respective Writings and Discoveries.

The Founding Fathers felt fourteen years was a good number for that “limited Times” with another fourteen years available if the author was still alive and filed to renew.

In 1831 the clause was changed so that the period of time was twenty-eight years with renewal available for fourteen more. The reason Congress did this was to give a fellow by the name of Noah Webster more time to profit from sales of his dictionary. You may have heard of it.

In 1909 the renewal period was extended to twenty-eight years. That’s a total of fifty-six years.

Assuming Newlin reissued her rights; by the standards of copyright laws in the original constitution the Soft Kitty song would have expired its sole ownership rights in 1965. By 1993 using the 1909 law.

The reason the Founding Father’s used the term “limited Times” is for the precise reason that the producers of the Big Bang show are now using the song. Newlin had plenty of time to make money off her work and by allowing it to extend into the public domain people can do more things with it. They can use it to entertain people.

Mickey Mouse, created in 1928, was set to become public property in 1984 so in 1976, anticipating this disaster, Congress voted to extend the “limited Times” to the life of the author plus fifty years. Another twenty years was tacked onto this in 1998. For Newlin this means the rights of her heirs to be paid for the song extend to 2074. The are other nuances to the law but I won’t get into them.

I could go on for quite a while about all of this and why it is so wrong but I’m going to stick to the point of this blog. As Nelson of the Simpson’s might have succinctly pointed out, Ha-ha!

Here’s the reality, like it or not. The daughters of Newlin have an excellent case. The published version of the song made it clear that Newlin retained rights. The publishing company had no right to authorize anyone else use. Copyright laws extend 70 years past the date of her death.

One thought on “The Soft Kitty Big Bang Copyright Nightmare”