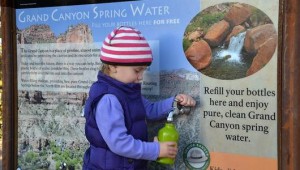 Yet another example of who actually runs this country was in display when the National Parks Service found that the clean-up cost associated with plastic water bottles was eating up their budgets and the bottles themselves were becoming a fairly large trash problem.

Many of the parks in question decided to stop selling plastic water bottles and install watering stations where visitor can fill up their own containers. An elegant solution that solves the trash problem, the recycling problem, and also allows park visitors to keep hydrated at a significantly lower cost.

Apparently not. The lobbyist for  the bottled water industry have spent half a million dollars bribing … er … lobbying Congress to prevent the Parks Service from stopping sales of bottled water.

I want to be clear. The Parks Service is not banning bottled water if people want to bring their own. They are simply not selling it anymore. They are providing a cheaper and clearly better system. They will sell reusable containers for people to use at the water stations or simply allow people to use their own.

Congress is now in the process of preventing the Parks Service from implementing the change. The arguments they use are laughable. Basically that by not selling bottled water they are encouraging the drinking of soda which is unhealthy. That park patrons might die of dehydration because they can’t afford a reusable container as opposed to a bottled water. The reality is much more obvious. The bottled water companies have lucrative sales of their products at our National Parks. They don’t want to lose those sales to water stations.

This is the country in which we live. Congress members do not care about this country. They do not care about you. They simply care about who is going to pay for them to be elected so they can enjoy the graft associated with being a politician.

Representative Keith Rothfus of Pennsylvania, where the bottled water industry is quite large, is leading the charge to prevent the Parks Service from making the change. Hmm, I wonder why?