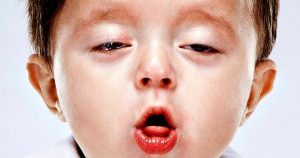 There’s an interesting little post making the rounds on Facebook about a mother who doesn’t believe in vaccination and whose one month old baby died from a disease popularly known as Whooping Cough but technically called Pertussis. As you would imagine, people are up in arms.

I did some research on the internet and I couldn’t find this particular case but there are a number of incidents of parents with multiple children whose entire families contracted the disease, and some whose babies died. So, it’s close enough to reality to at least discuss the general issue.

What I find interesting is the child in question is reportedly one month old. That’s too young to receive a vaccination in any case. The child contracted the disease from some other source and then died. That’s a pretty typical pattern for this disease. In the past, older children and adults contracted Whooping Cough on a fairly regular basis, but it is largely only infants who died from the disease. It can also lead to complications that end up being lethal.

Another interesting factor is that childhood immunization does not last forever. It’s important for adults to get booster shots. In addition, children who delay the vaccine are less likely to be immune.

The statistics are undeniable. Prior to the vaccine becoming available in the 1940s over 175,000 people contracted the disease in the United States each year, the vast majority of them children. This is likely a large underreporting of the disease because adults and older children usually do not require hospitalization or medical care and thus their cases went uncounted.

Reported cases of the disease reached a low in 1976 with about only 1,000 being noted. That has gone up, particularly since 2004 when large numbers of people began to skip vaccinations for their children. In 2015 reported cases topped 20,000. In countries that don’t use vaccinations, rates of Whooping Cough and deaths from the disease are still prevalent.

Pertussis is the best example of why getting vaccinations is important. Those most likely to get the disease and die from it cannot get vaccinations. Just like the supposed case being reported on Facebook. The way these infants get Whooping Cough is through someone else who has the disease but is unaware of it. The disease is highly-communicable. That’s a fancy way of saying it’s airborne. Anyone who has it and breathes can pass it along to nearby healthy people.

I’m not going to get into a long debate about why I think vaccinations are important. Nor am I going to tell you that you should get your booster and make sure your children are properly treated. I think people are too well entrenched into their positions to be changed by a simple article.

I will tell you a personal story. A couple of years ago at my annual checkup my doctor noticed that it was time for my Whooping Cough booster. I’m in pretty good health and the disease presents no threat to me. I could easily catch Whooping Cough and be only mildly discomforted. As I sat in the doctor’s office and he stared at me expectantly a lot ran through my mind. Friends of mine with small children. Going to the baseball game and sitting near families with infants decked out in Cardinals’ gear. Walking through the park chasing Pokémon with children all around.

The thought of how I’d feel if I was inadvertently responsible for the death of one of those children.

“Bring on the needle”, I said.