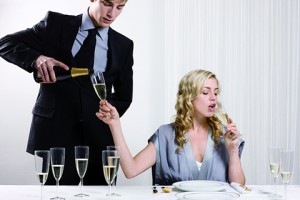 There’s an interesting case that was just resolved in France where a bartender was sentenced to a suspended sentence and ordered not to work in a bar for a year after serving a patron fifty-six shots of alcohol in a single sitting.

In the United States it’s largely illegal to serve habitual drunks or clearly intoxicated people so this could well have happened in the United States as well. I wanted to examine the law and the ruling from a Libertarian perspective. It’s clear that Renaud Prudhomme willingly and eagerly consumed the alcohol. He was trying to break a record for the most shots of liquor taken in a single sitting, the previous record being displayed in the bar. That seems to have been the crux of the legal case against Gilles Crepin who was the bartender on duty and who posted the record on a notice board.

I think it’s pretty clear that by posting the record Crepin and the establishment were encouraging patrons to try and break the record. It’s also fairly obvious to me that anyone who drinks fifty-six shots of alcohol in a sitting is putting their life at risk. Still, should it be illegal for bars to encourage drinking to excess? Should it be illegal for a restaurant to offer all you can eat buffets? That is also clearly unhealthy. Should it be illegal for governments to sell lottery tickets, which largely serve as a tax on the people who can least afford it? These are interesting questions in my opinion.

I do think there is legitimacy to the idea that a business should endeavor to make their environment safe for patrons. We have guard rails on overlooks to prevent people from falling and nets at baseball stadiums to prevent foul balls from harming spectators but this is somewhat different than rules about protecting people from themselves. If someone wants to drink themselves to death or at least into a dangerous state is it the job of the bartender to prevent it?

I absolutely don’t think bars should be posting information about the record number of drinks taken in a sitting but I’m equally convinced it shouldn’t be illegal. Any establishment that does so is encouraging people to drink too much and this leads to drunken behavior. I’m not a fan of being around people vomiting, stumbling around, erratically driving their vehicles, and all the other attendant problems with too much alcohol. If a bar proved to be full of people like that I’d stop going.

It’s my opinion that in the end we must allow people to make their mistakes in life. When we try to make the world a better place with such laws it inevitable makes the situation worse and the establishments in question find a way to defeat the rules.

There is no doubt that humans are often weak of will in many ways and that they can be taken advantage of by unscrupulous people. But, as long as the person so manipulated was not a victim of fraud and simply chose, of their own free will, to behave in a self-destructive fashion, so be it.