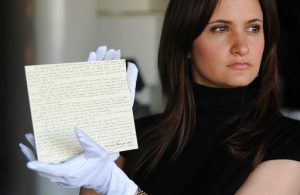 There have been a number of cases involving stolen intellectual property in the news lately and a short story written by Harry Potter author J. K. Rowling is the latest. In addition, episodes from Orange is the New Black were stolen and released after Netflix refused to pay a ransom.

This is an issue that touches close to home as I’m an author. I’ve written nine Sword and Sorcery fantasy books and I’m close to releasing my tenth. I’m certainly not nearly as famous as Rowling nor do I have as much to lose as Netflix, but I like to think of myself as a kindred spirit. What would I do if someone broke into my cloud account and stole the latest version of my book? Or, as in the case of Rowling, physically stole the manuscript I’m proofing? What if they released it for free on the internet? What if they attempted to extort money from me before doing so?

Rowling is imploring people not to purchase the stolen story which is, I suspect, about the only thing she can do. Anyone who wants to read the story and not pay for it, will be able to do so. In fact, anyone who wants to read any of her novels or watch any of her movies can illegally download them for free. It’s not particularly difficult. A collector can purchase they actual, physical story as a keepsake.

We live in a world in which intellectual property is all but impossible to protect. Even if television episodes, novels, movies, music, or any other information is not stolen; once it is released to the public, the ability to copy and redistribute it is all but unstoppable. People who want to purchase it from third parties who don’t own the intellectual rights will always find a way to do so.

What’s interesting about intellectual property theft, as opposed to physical theft, is the person stealing the information wants it. The exception being those who steal with the intent of extortion. Most people are not downloading music, movies, or novels because they plan to resell to a third party. They want to listen to, watch, or read the content. Thus, an appeal like Rowling’s makes an impact.

That’s reality and it’s important for those of us producing such content to understand it. Certainly, the Motion Picture and Music industries have lobbied Congress and gotten stringent and punitive piracy laws enacted. Some people have paid large fines for stealing music and other files but it hasn’t slowed down illegal downloading.

I can rely on the government to pass laws protecting intellectual property. I can rely on cyber-police to attempt to enforce those laws. I can rely on the court system to prosecute those few they catch in violation. What I can’t rely on is any of these methods to stop the theft.

The only way to stop most people from illegally purchasing or downloading such content is to ask them not to do so and to price the content in a way that is friendly. If Rowling were to put her story for sale at $20 a copy, that tempts people to steal it. However, if she places it on sale for $1.99, it is a very short story written on a single A5 postcard, I think the vast majority of her fans would simply shell out the two bucks. Why bother stealing when you know you can support the artist for a nominal price?

There will always be those who refuse to pay even a small price for such content but the various industries and artists have to balance their own profit margin with the potential for theft. As awful as it sounds to moderate our price because of thieves, there really doesn’t seem to be any other option. I currently cannot charge $20 for my novels because I’m an unknown, but if I was famous and my novels were hugely popular I might be able to do so. I wouldn’t.

That’s the only pragmatic solution to this problem. Make content cheap enough that regular people are willing to purchase it. That and use strong passwords!

What else is there to do?