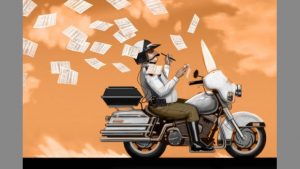 I just watched an interesting video on YouTube about pedestrian citations. Basically, pedestrians are given tickets for various violations including jaywalking and a litany of other things. The idea behind the citations is they are issued for the protection of citizens. Not crossing at a crosswalk is potentially a dangerous activity.

While I’m certain you won’t be surprised blacks and Hispanics receive the majority of these pedestrian citations, that’s not really what I want to talk about today. It’s the government supposedly trying to protect us that bothers me. In reality they are simply financing themselves through citations. The reason I say this is because the studies show these tickets are often given in areas where pedestrians have little choice but to break the law.

In the case of Florida, where the video originated, they are often given on streets where there is no sidewalk to use and yet there are bus stops. People must get to the bus stop but they can’t get there without walking on the street, which is a violation. Many other instances are when people move from one side of the street to the other but not at a crosswalk.

When you examine the region, there are no crosswalks available for multiple blocks. The alternative being to walk three, four, or more blocks out of your way to cross the street. I don’t care how much of a law and order person you are, that’s a law no one is going to follow.

The reality is making the streets safer for pedestrians involves spending money on building better sidewalks, designating more crosswalks, and a variety of other things. If the government actually wanted to make us safer, that’s what they’d do. Citations for these sorts of silly things are merely an excuse to generate revenue for the city.

For example, in my state of Missouri I violate a pedestrian law on an almost daily basis by walking on the left half of a crosswalk. Code 300.385. I’m fairly certain every person reading this article has violated this law many times. Because this law is violated constantly it becomes rife for abuse. The officer can charge whomever she or he feels like charging and let anyone else go merrily on their way. This is the problem with many laws and why we see people of color getting the majority of such citations, although, again, that’s not my main problem here.

The problem is the law. Let’s take 300.385 as an example of a law which continues to exist largely because of its revenue generating potential. The government will tell us the law was written to cut down on inconvenience when crossing the street at a crosswalk. By keeping opposite flowing pedestrian traffic on different sides, it is a better system. I don’t disagree with the principle of the idea. It is a good strategy. It just shouldn’t be a law punishable by a fine.

If someone wants to cross on the opposite side and there is no, or little, oncoming pedestrian traffic; all is well. If, on the other hand, the crosswalk is filled with people going both directions and someone is swimming upstream they are generally given dirty looks and even forced to the other side. That’s enough punishment. We don’t need to take people’s money in order to get them to walk on the convenient side of the crosswalk. Are we going to have laws forcing people to wait before entering a mass transit vehicle thus allowing exiting people to go first?

These laws are a tool of oppression on those who cannot defend themselves and serve the sole purpose of financing government agents without making life any safer or better for citizens. That’s just plain wrong.