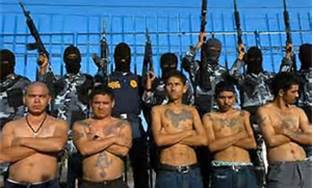 There were two stories in the news yesterday that are related in a sad way. A murderous scum was sentenced to death by a federal court and a marijuana dispensary was raided by federal agents.

How are these two things related? It’s a topic I’ve discussed numerous times before; the War on Drugs or as I call it the Drug Cartel. I spoke about how Mexico became a drug nation thanks in no small part to President Reagan and why the failed war on drugs is nothing more than a system designed to promote violence and wealth (for all the wrong people).

Today I feel the need to talk about these points yet again. I hope I’m not boring everyone.

Now, on to the stories. In 2003 a drug and gun dealer named Ronell Wilson was making a deal with two undercover officers. He decided to rob and kill them. After a number of trials he has been sentenced to death for the cold-blooded murders which no one is denying he committed. Meanwhile in present day America the federal government raided a legal dispensary of marijuana in the great state of Washington.

How are these two things related? Drugs. The only reason James V. Nemorin and Rodney Andrews ever came in contact with Ronell was because they were part of the Drug Cartel. We like to think that only Wilson was a member of the drug cartel but the reality is that without Nemorin and Andrews and others like them out there enforcing ridiculous drug laws, Wilson would not be the leader of a violent gang powered by drug money. Wilson would have had no money, no power. Nemorin and Andrews would be police officers out there today protecting and serving.

I’m certainly not blaming the undercover officers. They were doing the job they were sent to do and died because of it. I’m blaming the people who sent them to do that job.

Look at these two incidents. Look at them! Voters, legislatures, courts, law enforcement officers. LOOK AT THEM!!!

I’m a little heated on this one I guess. Our laws and our enforcement of them created all this violence, all this death. Good men dead. Bad men created. If we make drugs legal they will be bought and sold in little stores by clerks instead of in back alleys by murderous scum. It’s that simple.

Will some people ruin their lives with drugs? Certainly. Will there be accidents caused by people on drugs? Yes. Those things are already happening and they are choices made by free people. They choose to take drugs with the bad that comes with it.

Our lives are worse because of the Drug Cartel. Drugs are plentiful whether illegal in nature or prescribed by a doctor.

Nemorin and Andrews are dead and aren’t coming back but maybe we can save someone else. End the Drug Cartel. Make drugs, all drugs, legal. Create laws about activities allowed to be done while under the influence of drugs, create laws on the age someone is allowed to purchase drugs, allow industry to supply demand. End the madness.

Tom Liberman
Sword and Sorcery fantasy with a Libertarian Twist
Current Release: The Sword of Water ($2.99, buy it, read it, review it)
Upcoming Release: The Spear of the Hunt