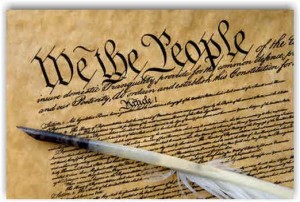 As a Libertarian I’m in a bit of an interesting situation in regards to the recent Supreme Court case Obergefell v. Hodges.

The decision makes it largely illegal to ban same-sex marriage in the United States. I’m in agreement with this completely. It’s ridiculous that the government can either ban or sanction what is essentially a contract between willing parties. If any group of legally competent adults wants to sign a contract of marriage with one another there should be no law against it nor government reward for doing so.

However, the decision itself relies on the Fourteenth Amendment to the Constitution. Specifically the Equal Protection clause. It argues that all people within a state must be protected equally by the Constitution. The Constitution is silent on the issue of marriage although that hasn’t stopped the Supreme Court from invalidating laws against mixed race marriages, men in debt getting married, men in prison getting married, and a variety of other laws written by the states to “protect” the institution of marriage.

Justice Anthony Kennedy spends a lengthy amount of time explaining why marriage is such an important institution and why people cannot be disallowed from getting married. In the end he relies on the Fourteenth Amendment and the Equal Protection Clause to justify saying that the Constitution protects same-sex marriage.

I disagree. I don’t think the Constitution protects the right to marry for anyone who is not what is called a Protected Class. These are people against whom discriminatory laws cannot be made. Homosexuals are not among them. This is why the Constitution can protect the rights of a black man to marry a white woman but not be used to protect two men who want to get married.

Without such protection the Tenth Amendment comes into force. This allows states to pass laws where the Constitution is silent.

Therefore I think the decision was wrong.

That being said, I think it is anti-American to restrict marriage in any way as long as all parties are legally competent. To do so is an example of government interference in the private lives of citizens where it has no place. Laws against same-sex marriages are among the most egregious overreaches of government authority in the United States today. However, they are legal. If a state chooses to thrust their government into the personal lives of the citizens of that state then it is up to those self-same citizens to vote for new politicians.

The practical result of all this would be, in my opinion, no difference. Time and attitudes are changing quickly. Without this ruling it would not be long before all states allowed same-sex marriages anyway. Those states that used laws to prevent such marriages would see loss of tourism and businesses that catered to those who thought same-sex marriages were perfectly acceptable. There are almost enough states (32 of the necessary 34) where same-sex marriages are legal to pass a Constitutional Amendment making it law for all states. This would have eventually occurred if there had been one or two holdout states.

In the end it’s all the same. Still, I don’t like the twisting of the Constitution to make it happen.