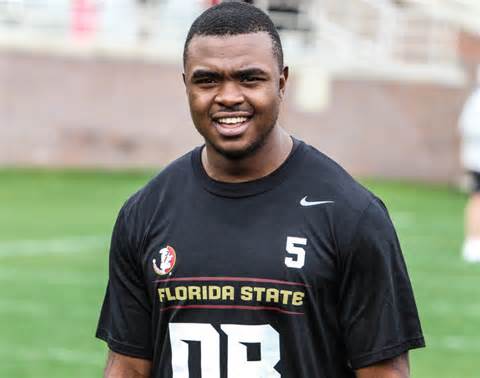 There is what many people would call a sports story making very small waves here in St. Louis about a player the Rams recently signed who has been arrested.

I don’t really think it is a sports story, it’s more an erosion of our rights story. It’s not a huge thing but it just makes me shake my head at our nation’s descent into a police state.

The Rams recently signed a fellow named Greg Reid who was once a top football prospect at Florida State but got into some trouble and was kicked off the team for unspecified violations. He then suffered a major injury while playing at a small school and eventually was arrested on a misdemeanor marijuana offense some years ago. As is common for municipalities across the U.S. there was a large fine for the offense and in addition Reid was put on probation. Reid either missed a probation phone call about six months ago or still had $400 to pay on his fine and a bench warrant was put out for his arrest in October of 2013.

None of this bothers me that much although I find excessive fines for minor crimes to be rampant in many districts because communities use it as a way to fund their law enforcement officers without having to pay taxes. There are many horror stories of this sort of extortion for things as small as crossing the center line but that’s a topic for another day.

What bothers me is that Reid was a passenger in a car that was stopped because the driver wasn’t wearing his seat belt. The officer in question had absolutely no right to question Reid or identify him in any way. The driver of the car should have been given a small fine and the story ended there.

Don’t get me wrong, Reid had a bench warrant in his name and the arrest itself is justified. It’s the manner in which it took place that bothers me. I cannot find justification for the officer to even talk to Reid, let alone get his name, run it through his computer, and make the arrest. It doesn’t matter that the arrest was legal and proper. It’s a violation of all our rights when the police are allowed to do this sort of thing. It’s an abuse of the power we give them! We give them the power, they don’t just have it.

This is not an isolated incident. As we become more frightened we tend to give power to the police and this erodes our freedom and is the real threat to our nation.

If the police are allowed to search, seize, and arrest for something as small as a seat belt violation; who is safe?

This may seem like a small deal and in many ways it is, but I’m still bothered by it. I think that if a police officers ever asks me a question, my answer will always be “I have nothing to say, sir”. That’s not a good feeling for me to have. I think the police largely do a difficult job and do it well. I respect our officers and admire them. When someone like me, a law-abiding citizen, finds himself afraid of the police, there is a problem.