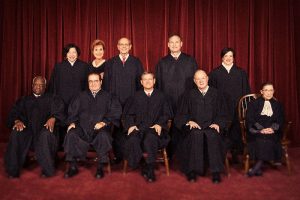 Ah, one has to love those misleading headlines. This one involves Supreme Court Justice Sonia Sotomayor and former Justice Antonin Scalia who passed away early in 2016.

The headline intimates that Sotomayor was so angry at Scalia that she wanted to hit him with a baseball bat. Those are the words she uses but the full quote gives a very different impression.

Here it is: I’ve told people there are things he said on the bench when if I had a baseball bat, I might have used it, but when you work so intimately with people, you get to know the really personal good side of them.

Essentially she is saying despite differences they grew to respect and like each other. Or at least she him although I suspect the feeling was mutual. Certainly the friendship between Scalia and Justice Ruth Bader Ginsburg was well documented. They might disagree, vehemently, on a position but they didn’t let that get in the way of their personal relationships.

Reading the comments there are two themes. One that someone should take a baseball bat to Sotomayor. The other that Sotmayor should have actually taken the bat to Scalia. Both are commentaries about We the People. How we handle disagreement. It’s a shame so few of us can behave like Sotomayor, Scalia, Bader Ginsburg and their colleagues.

This willingness to take political and ideological differences into a deeply personal and hate fueled realm does not bode well for the future of the Grand Experiment.

We are, the all of us, in this together. So few seem to recognize it anymore.

One thought on “Sotomayor and Scalia Misleading Headline”