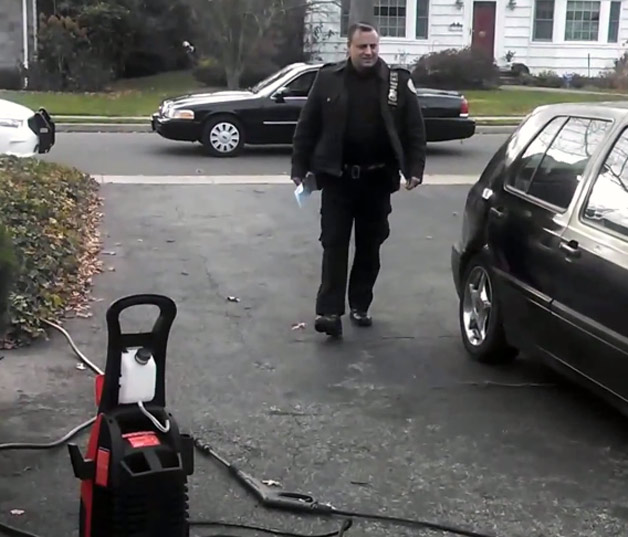 Yesterday I wrote about why broad legislation that leaves interpretation in the hands of law enforcement officers is generally more effective than narrowly written laws that aim to stamp out a particularly misdeed. I saw a story in the news this morning that fully explains why people don’t agree with me.

In this case a city ordinance prevents people from washing their cars in public places. One person called the police to investigate a neighbor washing their car in the driveway of their home. The investigating officer explained to the two men that while the driveway was a private location it could be seen from the street and thus was a violation of the ordinance forbidding washing of cars in public places.

There is clearly a lot more to this story than the one angle. The officer intimates that the men are doing other illegal things and that the police will pay more attention to them in the future and to avoid such scrutiny they’d be wise to skip washing their car. The car was newly purchased and rather beat up indicating several other possibilities. There is clearly a history between the neighbors. It seems to me the officer would rather be just about anywhere else. He was ordered to perform this duty by a superior and was thus obligated to do it. That being said, the reality is that a reasonable ordinance was being abused to harass people.

This is the argument against my broad legislation idea. That if police are allowed to use discretion, they will inevitably abuse that discretion to the detriment of the people they are supposed to protect.

I do not deny for a moment that when we leave interpretation of laws up to individuals we do open ourselves up to such events. That people do not always have the intent of the law in their mind and sometimes use such laws to intimidate and harass people. This argument against my broadly structured laws is not only reasonable but clearly factual.

So, am I recanting my original blog? Nope.

I think the system will always be open to abuse no matter how carefully and narrowly the laws are crafted. Those in power will be tempted to use that power to further their own short-term interests to the detriment of society as a whole. I still think the best long-term solution is to have broad-based laws that address underlying issues rather than narrow laws designed to avoid abuse.

The reality is that until we actually embrace the ideas of Libertarianism within our entire society there will be abuses. There will almost always be Bad Apples. I’m just of the opinion that we need to examine each apple individually and keep the good ones.

In the case in question there were a number of Libertarian based solutions that could have stopped the situation. Whoever at the police station that made the decision to dispatch the officer could have told the person who complained no, that washing a car in a personal driveway was not a violation of the ordinance. The investigating officer could have told his superior that he would not go, if further ordered could have lodged a complaint with the appropriate superior. Finally, the neighbor could have used a little personal judgment and not lodged the complaint at all. Someone should be held responsible for what happened. The neighbor for filing a frivolous complaint, the officer for his role, or the superior for giving the order. I’m not saying fire anyone. I’m saying train them to behave responsibly and reward them when they do.

Our lives, our decisions, our actions.