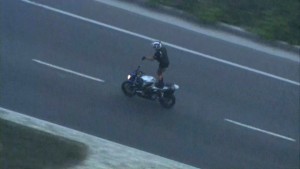 I just saw an interesting video at Yahoo News about a fellow that was riding a motorcycle while standing on the seat. He was chased down by the police, pulled into a gas station, and was arrested.

My question is what was he doing wrong? From the video he was keeping in his lane properly and wasn’t speeding. Now, that doesn’t mean he wasn’t breaking traffic laws while not on video but, from what I saw, I see no reason to arrest the guy.

I think the initial reaction of most people will be that he was riding recklessly and endangering those around him. That was certainly my first thought. I’ve been on the highway when motorcycle riders were engaging in reckless actions. Speeding, dodging between cars, and other violations that I think warranted a ticket.

After watching the video a few times I don’t see this arrest as warranted. He seemed to be as much in control of his vehicle as anyone else. He didn’t seem to be speeding. He wasn’t wildly changing lanes or doing anything that appeared to endanger those around him. There’s no doubt that what he was doing had a higher potential for causing an accident than driving from the normal seated position but can we start arresting people because it appears they might be doing something that could be dangerous but isn’t?

Can a police officer arrest you for steering with your leg if you are maintaining your lane properly? Can a restaurant be shut down for looking dirty but obeying the various regulations that govern the food service industry?

There are laws in various states about distracted driving but this fellow was clearly pretty focused on what he was doing.

I’m not opposed to traffic laws. I’m certain that the greatest danger I face on a daily basis is people in their cars who are driving poorly. That being said, if this guy was sitting in the seat no one would think that he was driving dangerously. His driving is solid. He obeys the traffic laws.

There is certainly the possibility that he was driving dangerously at some point earlier and if such video comes out I’ll understand the arrest. But, barring that, I think the arrest was an example of the police state in which we live. We live in a nation in which an officer who doesn’t like the way you’re doing something can decide to arrest you even though what it is your doing isn’t against the law.