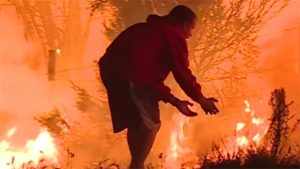 A video of a young man standing near an intense fire in California and rescuing a rabbit attempting to flee the flames has engendered a bit of controversy that I’d like to examine. One group of people, apparently the majority, think he is an amazing hero while another group think he was incredibly foolish and set a terrible example.

It’s an interesting case. If he had rushed toward the fire to save a baby would the perception be different? If he was a trained firefighter would people view his actions in a different light? The debate seems to largely center around the fact he risked his life, a human life, to save that of a common animal.

There is one group of people who think this was incredibly stupid and foolish and might inspire others to risk their lives for equally insignificant reasons. The second group includes those of the opinion the life of the rabbit is of equal importance to that of the man; that his actions are noble in that regard. Others do not argue the life of the rabbit equivalent to that of a person but still laud his actions as heroic and worthwhile.

A human life might well be more important than the rabbit. I think arguments can be made that given a choice between saving a human baby and saving a rabbit, the objectively correct choice would be to save the baby. Some of my more passionate animal rights friends will argue the rabbit life is perhaps of greater importance than one of the seven and a half billion people living on the planet. There are likely fewer rabbits than people.

To me the life of the rabbit and the life of the young rescuer are of little importance to the question. Likewise, the inspirational impact of the young man is not a primary factor I consider. To me it comes down to my Libertarian principles. He wanted to save the rabbit. He chose to do so. He was not coerced into doing so. He was successful and I think it cannot be debated his life was enriched. Perhaps he will look back on his actions with sheepish regret and realize risking his own life, and perhaps others who might have had to rescue him should he have succumbed to smoke inhalation, was not worth the risk. But, his actions reflect his clearly powerful desires of the moment.

Let’s imagine he did fall while making the attempt. That another person went to rescue him and died in the effort. The same principles I’m applying to the young man work with the hypothetical rescuer. She or he chose to make the attempt. That is what being free is all about. This is the heart of the Libertarian Movement.

The government solution is that we must be protected from doing things that might cause us harm. I would not be surprised to see legislation arise in some states making it illegal to attempt to rescue wildlife from dangerous situations.

It is clear the young man put himself in danger. He might inspire others to do the same. So what? What business is it of yours, of the government’s? It’s his life and, as long as he’s not harming others, he should be able to lead it as he chooses!

One thought on “Hero or Bad Example to Save Rabbit from Fire?”