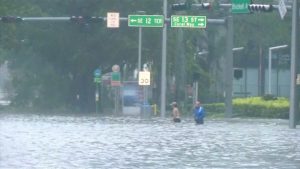 Hurricane Irma has run much of its destructive course and I wanted to take a moment as a Libertarian to discuss the government reaction to the approaching storm and why I think it was a ridiculous overreach.

The storm was huge, it caused massive amounts of damage as it approached the United States. A number of people on islands in the Caribbean were killed. There was and remains danger. The question becomes what is the responsibility of government in situations like this? The moment I was pushed over the Libertarian Rant Cliff was when avowed small-government Republican Governor Rick Scott declared in no uncertain terms, “You cannot survive this.” He was referring to the storm surge that could potential swamp many areas with water.

I’m quite comfortable calling that statement a hysterical lie spewed by a politician who has completely lost track of what it is he is supposed to be doing. Hurricanes are inherently unpredictable. There was a chance the surge would be relatively small, which it ended up being. Many people, of course, survived the surge. Not only was the statement completely wrong, hey we all make mistakes, but it was clearly a lie designed to frighten people into behaving the way the governor thought they should act.

This is what government has become in our nation. People in positions of power not only think they know better than us, but feel the need to frighten us with hysterical proclamations and enact draconian legislation. I’m happy to say at least the police and national guard were not marched through neighborhoods forcing people from their homes. At least the governor has that amount of decency left.

Let’s discuss what a responsible politician should have said. The storm is extremely dangerous. If you decide to remain in the area, here are some are some websites that show you how to properly protect your house. Here is a list of items you should purchase based on the size of your family. Emergency crews are going to be overwhelmed and cannot be counted on to rescue you in a timely fashion if the worst predictions come true. You are in charge of your own life, not me. You have all the information available and I trust you to make the best decision possible.

The danger of Governor Scott’s proclamation is there is certainly going to be another hurricane in the future. The fact that many people hunkered down and survived makes it clear his proclamation was fear-mongering idiocy, those people are likely to ignore warnings in the future. Those stupid politicians are always preaching disaster and it’s never as bad as they say. The reality is sometimes the worst predictions do come true. Sometimes there is horrific danger. If politicians create an environment where they are considered overreacting fools, people stop listening to them when there is real danger.

One of the main Libertarian mantras is that the job of government is not to save us from ourselves. I have no problem with the government issuing warnings, explaining the dangers that confront us, but I draw the line at hysterical nonsense like that Governor Scott spewed. You, Governor, do not know what is best for me. Even if you did, it’s not your responsibility to force or frighten me into doing what you want. I’m an adult, treat me accordingly.