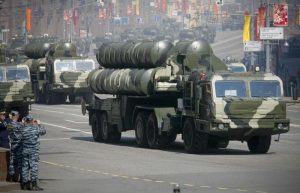 The nation of Turkey just purchased a sophisticated anti-aircraft missile system from Russia and I’m willing to bet it’s just a tiny story way down on whatever news site you frequent, if it’s there at all. It is a far more important story than most of those you are reading. Turkey is a member of NATO. By and large, the purpose of NATO is to counter the threat of attack from Russia. So, this purchase is a sign of a significant shift in that nation’s commitment to the organization.

Turkey has, until now, purchased most of their military hardware from the United States. It is estimated there are about fifty nuclear bombs at Incirlik Air Base and that base is an immensely important strategic staging area giving us the ability to project force into the region.

This purchase further cements the idea Turkey is turning away from NATO and welcoming the overtures being made by Russian President Vladimir Putin. As our relationship with Turkey continues to sour there is every possibility the United States will lose one of their most important allies. Without Turkey as a supportive ally the entire Middle East is dramatically destabilized. If Turkey quits NATO, something I see as a real possibility at this point, it will be a disaster from which the organization will not easily recover. Turkey has the second largest standing military force in NATO.

What is happening is a direct result of our meddling in the politics of the region, particular siding with Kurdish forces in the war against ISIS although there are other reasons as well.

The recent problems between the United States and Turkey started in 2016 when a dissident living in the United States, Fethullah Gulen, may have attempted to orchestrate a takeover of that country. Turkey certainly believes he did although the United States refused extradition without better proof. The biggest blow to relations between the two countries has been the continued arming of Kurdish forces helping to fight ISIS in Syria and Iraq. These forces have long been considered a terrorist organization in Turkey where they have killed approximately 37,000 people in various operations since 1984. The Kurds are now allowed an autonomous territory in northern Iraq and plan a referendum to declare independence. Such a vote will put the United States in an extremely difficult position. In addition, our declaration of support for making Jerusalem the capital of Israel has further destabilized relations.

The upshot of all this political maneuvering and battlefield conflict is Turkey is moving away from the United States, Europe, and NATO and toward Russia. There is a large Islamic population in Turkey although, for now, the country has remained secular in the courts and military. The purchase of these missiles from Russia, which cannot be integrated easily into the existing anti-aircraft systems, further confirms the movement of Turkey away from the United States and toward Russia.

I cannot strongly enough point out how our meddling in these situations invariably comes back to haunt us. We backed the Kurdish fighters primarily because they were one of the most effective military forces in the region. It seemed to our leaders that backing the Kurds to defeat ISIS was the best strategy.

I think most of our politicians were so frightened by the emergence of ISIS that this policy seemed correct. Before agreeing we must ask ourselves how ISIS became so powerful in the first place. That outcome was almost exclusively the result of our war in Iraq. The war was conducted to make us safe from the potential of weapons of mass destruction. How had Iraq had grown so powerful in the region? Well, because we backed them against our enemies in Iran during the wars between those two nations. We feared the growing power in Iran. Why is Iran considered an enemy? Take a wild stab at it: Because we backed a coup in that country and installed a brutal dictator because we feared a populist takeover.

Are you seeing a trend?

We enact policy after policy intended to make the United States safer while meddling in the politics of country after country and in so doing make our lives markedly less secure. Every time we act in this manner we alienate people in the affected nations, people who eventually come to power. Our politicians convince us these actions are a method to making us safer and yet, time and again, the actions end up resulting in more danger.

Our current leaders are now selling increased meddling in more and more countries. Those who support such activities have convinced themselves it makes us safer. If you support such policies, I urge you to look at the historical record. It’s not good.