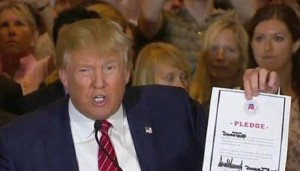 Presidential candidate Donald Trump made a pledge today affirming that he will support whatever Republican candidate wins the primary election.

Blah. I’m no fan of pledges and oaths. It seems to me anyone who asks you to swear an oath is basically doing one thing:

Trying to get you to do what they want you to do. You can’t play with us until you swear your oath.

It generally involves an organization that wants you to be loyal to them. The oath has no binding influence on your decision to remain loyal to that organization. They are merely words to that effect. There are certainly no legal remedies should the pledge be broken.

Here’s what I find quite interesting about oaths. They are taken extremely seriously by the honorable and used to gain advantages by the dishonorable.

The person who swears an oath with all honesty and integrity is not going to break that oath easily, but they would never do something against their principles in any case. The honorable swear an oath to something they believe in. They are going to keep that oath regardless of whether they swore it or not. The words merely reinforce their own beliefs. The honorable person who swears to defend their country, or to protect and serve, or whatever else, wants to fulfill that pledge. The words have meaning to that person but not beyond what is in their own heart.

A dishonorable person who swears an oath is simply doing it to give the illusion they are something which they actually are not. They make the pledge with no intention of keeping it should circumstances warrant them breaking it. They are taking advantage of honorable people who assume the words have meaning. To the dishonorable such promises have no meaning.

I have little sympathy for an organization that wants me to swear an oath. I don’t Pledge Allegiance to the Flag, not because I’m planning on being a traitor to my nation, but because I’m confident in my patriotism, I do not need to put it on display for anyone else, nor do I need to prove my loyalty to myself. Nor is my loyalty unconditional.

I have respect for those who make pledges and oaths fully intending to keep them. These are the honorable among us. I say to you, don’t worry about the oath. Know your mind. Remain loyal to that which you believe. Your actions make all oaths unnecessary.

To those who make pledges with no intention of keeping them. You don’t have me fooled.

As to this ridiculous pledge Republicans are making to support any members of their party regardless of any other circumstance. Well, I’d never vote for a person who swears to support an as yet unknown candidate. It’s closing your eyes and signing a blank check. It’s a foolish decision and I, for one, don’t want a president willing to do such.

I do not see Libertarians pledging to support a phantom nor is anyone asking them to do so. Most Libertarians I know support Rand Paul. Certainly not because he has made the misguided decision to run as a Republican, but simply for the policies he espouses and has enacted in his time in office. We Libertarians like to make decisions on the facts before us, not the ghostly phantoms of possibility.

2 thoughts on “What’s in an Oath? A Trump Tale”