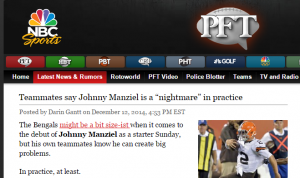 And the winner for misleading headline of the week is awarded to Pro Football Talk with this doozy about Johnny Manziel.

Teammates say Johnny Manziel is a “nightmare” in practice.

For those of you not following the NFL closely I’ll do a quick recap. Manziel was a controversial pick in the first round of the NFL draft and some think he will be a great quarterback while others think his style is not suited to the league. The starting quarterback of the team has been ineffective lately and Manziel made his first start today.

The headline lures you in with a promise that his teammates are finding problems with him during practice. The reality is just the opposite. They say that Manziel presents unique difficulties for defenses because of his ability to extend plays.

I’m not jumping in here as a fan of Manziel or a naysayer. I’m just telling you that the article isn’t what you think. Therefore it wins this week’s Misleading Headline of the Week!

By the way, Manziel had a rather awful first outing which will cheer those who dislike him. Time will tell.