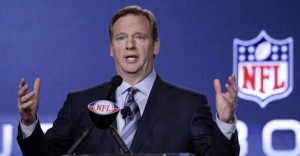 The National Football League suffered a serious blow to their image over the Ray Rice incident. I wrote about it back in September of 2014. Now the Commissioner of the League, Roger Goodell, has come out with a statement that he hopes will alleviate some of the damage.

It goes on for a bit but the part I want to discuss today goes like this: Character and values sits above everything else …

I have a thought about that: A ha ha haha haaaa haaa, a haa haaaaa haaaaaa!!!

I do not laugh because it’s a funny situation. It’s not. Ray Rice knocked out his wife with a single punch. She precipitated the blow by yelling at him, punching him, and spitting on him. The league suspended him for two games initially but months later increased the suspension because people saw the video. The arbitrators between the union of players and league ruled that Goodell had violated the rules and reinstated Rice (something I argued for in my original post). It’s far from funny. It is disturbing in many ways. Today’s blog isn’t about that. It’s about the blatant lie that Goodell just told.

The NFL is about a lot of things but the character of the players does not come before everything else. The league wants to make money. The various teams want to win games and make money. The players want to succeed, win games, and get paid more money. What comes first? Winning and with it money. Now, I fully understand that if the league fails to punish players who do things that society abhors that might cut into their profits. Therefore the behavior of players, management, and owners is of some importance. I don’t dispute that members of the NFL organization would like to eliminate domestic violence completely. They would like to end serious head injuries. But to say character and values sit above everything else is rank hypocrisy. It almost makes my ears bleed.

Almost all athletic endeavors place the ability to play the game well above everything else. Who was chosen first in grade school gym class? The smart kids? Of course not. There are plenty of intelligent and ethical athletes who play football at every level. If a team refused to play anyone with character issues they wouldn’t win a game. You’re good to your wife and kids, you’ve never broken the law, you have an ethical code? Whoop Dee Doo, can you ball?

I love my St. Louis Rams. I truly do. Janoris Jenkins was drafted after having been kicked off his college team for marijuana use. He was a 22 year old kid with multiple children from different women. Don’t be fooled though, he can play. Every year teams draft players who were involved in domestic violence incidents, who failed drug tests, who have a difficult time keeping their pecker in their pocket. But they can ball. And that’s what is most important. It’s not just players. Coaches and owners have broken the law and done unethical things. Can they bring home a winner is the question most asked of such people.

I’m bothered by such blatant falsehoods. It’s as if he thinks he can look us right in the eye and lie knowing we don’t care as long as it’s what we want to hear. It’s as if the truth doesn’t matter.

As Master On says in my novel The Black Sphere: What you wish to be true is irrelevant. Only a child believes what they desire to be real is actually so.

I have but a single question for Commission Goodell: Do you consider getting up on a podium and telling obvious lies to a national audience be a trait of those with character and value?

One thought on “Character Above all Else in the NFL”