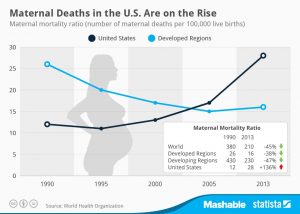 I’m not sure if I’d call it a misleading headline so much as a clickbait sensational headline but Vox splashes the following headline: More and more women are now dying in childbirth, but only in America.

The story, written by Sarah Frostenson, is quite informative and interesting. The headline leaves it up to the imagination of the viewer as to what is causing more women in the United States to die during birth and the mind, left to its own devises, can come up with some interesting scenarios. Personally I was thinking that the rise in infections or perhaps more home births was the culprit.

But no. The culprit is that more and more women who are giving birth are dangerously obese. Deaths from the complications of anesthesia have virtually vanished, deaths from infections are about the same, deaths from hemorrhaging and blood pressure spikes have dropped. People who are morbidly obese put tremendous strain on their hearts and also have diabetes at a very high rate. Add in the stress of giving birth and there you have it. That’s why maternal deaths are rising in the United States but not in other countries.