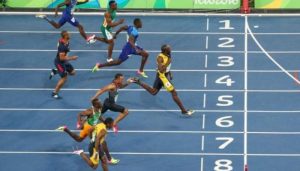 I was at the gym the other day when they were running the first heats of the 100 meter dash at the Olympics. I’m not a big Olympics fan for reasons I’ve laid out before more than once. As the heats went on the announcers kept talking about Usain Bolt and his upcoming appearance and I found myself hoping that my aerobic session on the exercise bike lasted long enough to see it.

A tremendous athletic feat is extraordinarily compelling. I’ll never forget Secretariat winning the 1973 Belmont Stakes. I’ll never forget watching the St. Louis Steamers indoor soccer team coming back from a six goal deficit in the finals against New York, I was there. Yes I was. I’ll cherish the memory of Ricky Proehl holding onto a Curt Warner pass, I was there also, to win the NFC Championship game against Tampa Bay.

This is why sport is such a powerful force in many of our lives. I have friends who were decidedly not sports fans who became fanatics after watching David Freese hit a home run in the 11th inning to win game six of the 2011 World Series, I was not there sadly.

So what’s the point of my blog today? I think the chance that Bolt and every other 100 meter sprinter in the Olympics is using Performance Enhancing Drugs is about 100 percent.

The science behind using PEDs is far ahead of the science of catching users. I think there are a number of reasons for this disparity but one of the important ones is that we largely don’t want to catch those using such techniques. We love the amazing performances. We fool ourselves into thinking only the hated opponent is using such methods. Our heroes, of course not.

Ratings go up for tremendous performances. The people who manage the sports leagues, the Olympics, the World Cup, and your local high school volleyball tournament are all aware of this. They see the revenue go up when star performers excel. It’s incontrovertible.

We love the astounding. We revel in the amazing. We encourage the cheating. We pretend it’s not happening. It is.

I offer no solutions. I just prefer to be honest with myself. Do you?

Oh, yeah, Bolt was on the track getting ready to get into the starting blocks when I finished my workout. I could have waited a few minutes and watched the race.

I took a shower.

3 thoughts on “Usain Bolt and How Our Nature Promotes Cheating”