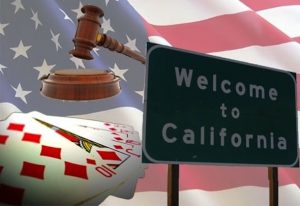 I watch an extremely entertaining fellow by the name of Jason Somerville play poker on Twitch and if there is any subject that can rile up the mild mannered, friendly fellow, it’s the people who are trying to stop online poker from becoming legal. It was during one of his rants on the subject that I became aware of legislation that is pending in California.

The problem with this bill is that it allows only existing card clubs and the California Native American tribes to host the websites. This means that the established online poker sites would not be able to compete. In addition, the vast majority of the money taken in from such online gambling sites must be given to the horse racing industry. This to cover for the expected losses to that industry from wider gambling options.

That’s the very definition of crony capitalism. Basically the tribes now host the majority of gambling in the state of California and they don’t want competition. There is a huge amount of money involved.

You may not realize how much bigger California is than the rest of the country but the numbers are mind-boggling. California has the sixth largest economy in the world, tied with France. They produce fully 13% of the total agricultural output of the United States. They purchase enormous amounts of products produced in the other states who are quite dependent on them as a consumer.

I tell you all this not to brag about California but to give you the reality of the amount of money that is at stake. Those Native American Tribes want that money and they don’t want to share it with existing online poker sites.

If we lived in a society that actually valued real capitalism we would not consider such factors as who is to benefit from legislation. We’d simply decide if we thought gambling was something the state should allow or not allow. I’d argue against, but understand, someone who thinks the government should prevent people from gambling because it’s potentially harmful. The legislators would decide who they agreed with and pass laws.

This situation is not that. It is a product of the way government has come to have undue influence on business. Don’t get me wrong. I believe in anti-trust laws. That being said, I absolutely think the more power government has over the success or failure of a business, the more a practical business person must be involved in influencing politicians.

The more business gets involved with politics the more corrupt it becomes. Business operators become less interested in providing a quality product. They simply want to have legislators pass laws that favor their business at the expense of competitors.

What should happen in this case is simple. If California decides to legalize online gambling the horse racing operators need to work harder to get people to visit. The Native American Tribes need to either partner with the existing Online Poker sites or develop their own alternatives. That’s business.

It’s not up to government to decide who succeeds and who fails. When they do so we all lose.

One thought on “Online Poker in California and Crony Capitalism”