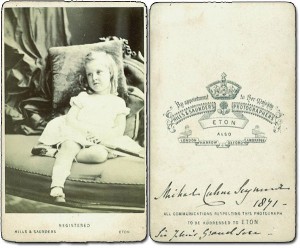 I just read an interesting article written by a mother whose son prefers long hair and is often mistaken for a girl. My own opinion is that young boys and girls haven’t begun hormonal changes and are largely the same from a physical standpoint anyway, so who cares? I expected the comments to be along the same lines and I was sorely surprised.

It appears that a healthy percentage of people think it’s wrong for a boy to look like a girl when young. That long hair on a boy is a bad thing. I wonder what they would make of the fact that until modern times it was pretty common to put boys in dresses until they were older. I suppose nowadays we’d be criticizing mothers who did such a thing as turning their children gay. At least that’s what seemed to be a fairly widespread point of view among those commenting. That and the poor boy would be traumatized for life.

I think the problem largely rests with a sexualized society in which people apparently judge a young child by the length of their hair. It’s ridiculous because they are merely children. As I mentioned earlier, hormones have yet to kick in. Except for a boy’s penis and a girl’s vagina there’s hardly an outwardly observable difference between the two. You’d pretty much have to do a blood test to see the difference. They are interested in things that interest children. Sexual roles aren’t part of the equation and when we try to force them on these children I don’t think we’re doing them a service.

Be a man? Girl’s are supposed to be pretty? How about be a child! Enjoy it. Play with your friends. I can’t believe that forcing a young male child to look like an adult man is good for his long-term mental health. It’s society that is somehow embarrassed by a boy who looks like  girl or a girl who looks like a boy. The reality is they pretty much look the same until hormones begin to turn them into adults.

I’m reminded of the recent incidents where a man smacked a two year old boy for wearing a pink headband that belonged to his mother and then verbally abused the woman and the airport brawl where a drunken traveler attacked a man for wearing a pink shirt.

The problem is not with the child, it’s with the person who has an issue with long hair or a ribbon. How many boys with older sisters didn’t play dress-up or wear their mother’s heels and clomp around the house? It’s not a matter of gay or straight, boy or girl, man or woman. It’s a matter of pre-pubescent child.

We are far too interested in other people’s business in this country and the politicians we elect reflect that misguided ideology. Back when men were men, as we like to say, no one gave two rats asses about a boy wearing a dress and having long hair. No one! It doesn’t make us more manly to care about it now, it reveals our own insecurities as a society. Our own paranoia and fear.

2 thoughts on “Is a Boy with Long Hair a Bad Thing?”