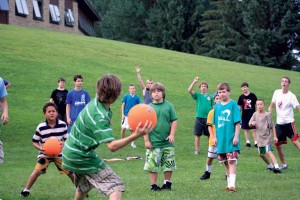 I was watching one of my favorite shows, The Goldbergs, on Hulu this evening and sighed when I noted the oft used theme of Dodge Ball. It seems to be an ubiquitous episode for every show which has school aged protagonists.

The only purpose of my blog today is to educate those who probably have the wrong impression about what Dodge Ball is and what it is not. I do not pretend that my description of the game is the only interpretation. I played dodge ball from elementary school all the way through high school but that doesn’t mean I played it in all its forms. My experience might well be different than others.

Dodge Ball is portrayed in the media as largely one of two things. A sadistic exercise invented by gym teachers to hurt and humiliate weaker children or a strength building exercise that helps children gain character. It might well be a bit of both but first a quick perusal of the various rules by which I played.

Most versions of the game have the following rules.

An optional rule that was often invoked during games I played was that after a period of time a signal would extend the dividing line between the teams so there were fewer places to hide. If a game proceeded long enough another whistle invoked essentially a free-for-all where anyone could run anywhere and throw their ball at an opponent. This usually ended the game quickly.

Balls came in several sizes with the most dangerous being smaller and easily held in one hand. These could be thrown with fairly significant force and cause a moderate amount of pain although little in the way of serious injury.

So, what was Dodge Ball to me? A game to be won. I wasn’t the fastest, strongest, or quickest athlete on the court but I was far from the least coordinated. I could throw a ball with good velocity and excellent accuracy. My hand-eye coordination was my biggest strength and I was dangerous to throw against because I could catch almost anything hurled my way. I can understand how others were perhaps terrified by Dodge Ball but the same look of fear was in their eye during a kick ball game when it was their turn to perform. Those rubber balls could sting, particularly the little ones, but I suffered far more pain in other sporting endeavors. Those who were frightened allowed themselves to be hit early and retreated to the sidelines. I was not one of them.

My experience is that it was simply a children’s game and a lot of fun was had by at least this participant. I remember a few free-for-all sessions where bigger and stronger players, upset that I had put them out in earlier matches, simply knocked me down and bounced a few balls off me but the anger I felt was in losing the game.

I’m not discounting the terror that some surely remember from the game but I don’t think it was any worse than other gym class endeavors. The humiliation of waiting to be picked was probably far more damaging in a psychological, if not physical, way. Yeah, I got popped in a face by a few of those rubber balls but no harm was done. As I’ve said, it was a game to won, and I wanted to win!

So there you have it. One man’s memory of Dodge Ball. I don’t think it built much character for me but it didn’t terrorize me either. I hope I’ve helped dispel some of the myth. Your experiences may have been different.