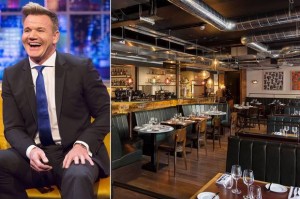 There’s an interesting story in the news this evening about celebrity Chef Gordon Ramsay and the opening night for his new London restaurant.

On opening night his restaurant endured 100 no shows out of a total of 140 bookings. The inference that Ramsey makes is that a rival restaurateur was behind all the false reservations.

When I perused down to the comments, as I always do, I anticipated a lot of people expressing their joy and this comeuppance for Ramsay. The reason I suspected as much is because Ramsay comes across as arrogant and cruel on his various television shows. He yells at young chefs and calls them names when they fail to prepare a dish to his standards. He is harsh and abrasive to say the least.

According to those who know him, this is somewhat of a facade to generate ratings and interest in his various restaurants. I don’t have any doubt that Ramsay is somewhat of a perfectionist who doesn’t tolerate stupidity. He also seems very loyal to those who are good at their jobs and it is well-documented that he has helped other chefs in their careers. So when I got to the comments I was prepared for the worst.

I was quite surprised that the comments were largely along the same line as my thoughts on the subject. Whoever pulled this “prank” is a selfish prick. In addition to hurting the owner of the Restaurant they also financially hurt every employee. Ever person who worked very hard to get that place open on that night and was hoping to be rewarded for their hard work. That’s what a Libertarian like myself believes is one of the most important societal events. People who plan, work hard, and accomplish something must be rewarded.

This action, by whomever took it, was not a prank. It was a violation of everything a Libertarian holds dear. It was also theft and not just from Ramsay and his employees. There were surely many people who wanted to go that night but couldn’t because it was booked. They were robbed of a meal. They were robbed of spending their money willingly and happily.

If you want to beat Ramsay then open a better restaurant next door. That’s the Libertarian way. This? Rude and wrong. For shame!