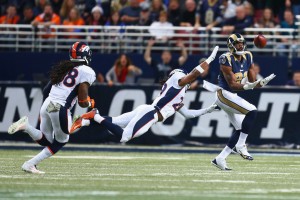 As most of my loyal readers know, I’m a huge sports fan and living in St. Louis that means when it’s football season I’m all in on the Rams. I know, I know, it hasn’t been good for a long while but I just love going to the game and I have Rams season tickets. On Sunday the Rams played, by far, their best game of the season and defeated the heavily favored Denver Broncos.

The Broncos were 7-2 going into the game while the Rams were 3-6. Broncos fans arrived early and in very strong numbers. I sit near the 40 yard-line on the Rams side of the field and generally there aren’t that many opposing team’s fans in my area as they prefer to be on the other side of the field. Yesterday was an exception as thousands of Broncos fans were everywhere in the stadium including a woman right next to me and two young boys behind me.

During the game they cheered their Broncos on, as should any fan, but they did it in what I would describe as a respectful way. As the game entered it’s final minutes they began to file out of the stadium and that’s when what I want to talk about today happened. A couple of fans not far from me started to taunt the Broncos fans. Really?

Just a quick recap for those of you who aren’t football fans. The Broncos were in the Super Bowl last year and have made the playoffs the past three seasons and it’s looking quite likely they will make it again. The Rams last made the playoffs in 2004 haven’t had a winning record since 2003 (they went to the playoffs with an 8-8 record in 2004). The Broncos have a tradition of winning and while the Rams do as well, it has been a bad ten years for the team.

When I heard those taunts I saw red. I mean, really? Here we are, sad-sacks of the NFL for the last ten years, and we manage to win one game against the team that lost in the Super Bowl last year and you’ve got the nerve to taunt their fans for leaving in the last couple of minutes of a game? Believe me, I’ve dragged my sorry behind out of Dome after losses on many occasions and when I hear a fan on the winning team taunting it gets my goat.

I turned around and yelled, “Be a gracious winner”. I wanted to yell something with a little more sting but I seem to have made my point as the taunting stopped, at least in my section.

It brought something to my mind though. What is it to be a gracious winner? What sort of person wins and then, unsatisfied with being victorious, has to taunt the losers or their fans? What does it say about the character of that person? When you win you should be joyous, not filled with rancor. It don’t even see how it’s that difficult to be magnanimous in victory. It’s a natural feeling to say something along the lines of, “well, we just played better today but you’ve got a good team“. Certainly fans from other cities have said something like that to me as I filed dejectedly out of the Dome on any number of occasions.

Defeat with dignity? That’s tougher. You’re mad your team got beat. You hate the other team and their fans. That’s a true test of character. Hold your head up and say “Darn the luck, we’ll get them next time.” That’s not easy but that’s what people with character do.

I don’t have a lot of room in my heart for Rams fans who taunt their opponent in victory. I suppose you could say our fans just aren’t used to winning but I don’t buy that excuse.

To all those Bronco fans at the Edward Jones Dome on Sunday I say this: Thanks for coming to St. Louis. I hope you had a good trip. You’ve got a great team and despite the outcome I’m sure many good days lie ahead.