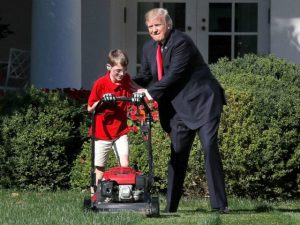 There’s a feel-good story making the rounds about a fellow named Frank Giaccio who wanted to mow the White House lawn. There is a lot of good in the story but there is one small thing that bothers my Libertarian sensibilities.

Giaccio mows local lawns in the Washington D.C. area and contacted the White House about his desire to perform the service for them. Someone read the letter and invited the young, he’s eleven-years-old, man out to do the job. He was loaned a mower by the National Parks Service and went to work.

I applaud Giaccio for his entrepreneurial spirit and his eye toward publicity. I congratulate the White House and the Parks Service for setting up the event. The young man got a personal visit with the president. All this is great. However, what he didn’t get was paid.

I understand the publicity about the event was worth more to Giacco than any small remuneration, but I’m telling you if I had been president, I would have insisted on paying his normal fee. That’s the message I think is missing in all of this. I’m reminded of the events of Atlas Shrugged when Dagny Taggart and Jon Galt go sightseeing in The Valley. They rent a car from a friend. It’s a small but important moment in the long novel. They don’t borrow the car, they rent it. When services are rendered, payment should be given. If you do something for someone, even a friend, they should pay you for your efforts.

This is the heart of capitalism.

Don’t get me wrong. I don’t think this is some major transgression by the White House, the Parks Service, or even young Giaccio. I’m not triggered. I just think it would have been a good lesson to insist on paying the lad. He did the job, pay him.