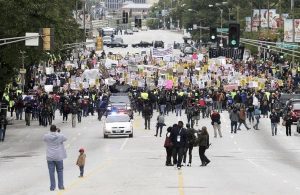 There’s bit of a hubbub going on here in my hometown and right down my own street in regards to the fact that former police officer Jason Stockley shot and killed suspected drug dealer Anthony Lamar Smith.

There’s a lot of people talking about various things in the news and up and down my social media platforms. My conservative friends rail against protestors who broke windows. My liberal friends argue against the verdict in the case. Both sides assert angrily, and often with threats of violence, their moral superiority. I think there are interesting and pertinent arguments to be made from both sides but I’m going to take this moment to interject my Libertarian perspective. I think it’s something people on both sides of this issue should take into account, not that I would ever force them to do so.

In a Libertarian world, adults are allowed to put whatever chemicals into their body they want. There are no laws against certain kinds of drugs. Heroin is just as legal as Oxycontin. It can be purchased at the local pharmacy for an extremely modest amount of money. Stockley is still working as a police officer and has never been tried for a crime. Anthony Lamar Smith is alive and well. There are no windows broken in the Central West End or University City, one a place where I currently reside and the other my old home. Traffic is flowing normally without disruption in downtown St. Louis. That’s my world. Sadly, it’s not the world we live in.

It’s important to understand that heroin and prescription opioids are, in fact, pretty much the same thing. Law Enforcement Officers are busy risking their lives in order to control the competitors of the pharmaceutical market, not for the safety of the community. The laws against drugs are inarguably making our communities less safe, they are making life more dangerous for everyone. They are funneling huge amounts of money into the hands of violent criminals.

To everyone out there protesting either in physical form or via social media, arguing back and forth with friends and family, saying horribly insulting and threatening things to those on the other side, filled with self-righteous certainty; ask yourself this question: Am I partially responsible for what has happened?

Do you unconditionally support the War on Drugs? Do you support Law Enforcement Officers under almost every circumstance? Do you oppose such officials almost always? Do you hurl nasty and violent insults at those on the opposing side? Do you prefer to pat yourself on the back assuring yourself of your moral superiority rather than looking into real solutions? If you answer yes, you are part of the problem.

There is a simple solution. End the War on Drugs. It’s a War on Us.