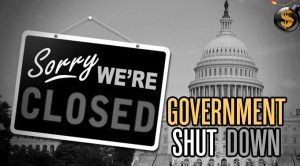 The United States Congress managed to cobble together a budget which allows the government to continue to operate for another four months, but President Trump has suggested just letting it stop, a government shutdown, would be beneficial. He’s right. There are some benefits to allowing the government to shut down but, naturally, there are drawbacks. I’d like to spend some time examining the positives and negatives.

The biggest benefit to allowing the government to shut down is to see how many services we assume are vital, are not so. Everyone has their own version of what is critically important. For one side of the fence, all military expenditures are necessary. For another, food aid cannot be done without. The reality is somewhere in between. There are plenty of places the budget is insanely bloated. I won’t go into details, but shutting down the government and seeing the results gives us a window into what is necessary and what is not.

Many of the services provided by government actually cause harm to the people they are trying to help. By putting certain programs in the hands of the government we become dependent on that entity. This means when the people in control of the purse strings change their priorities, we are at the mercy of government. If we took care of many of these issues ourselves through things like Crowdsourcing, we unbind the shackles that keep us chained.

The drawbacks are fairly self-evident. Everyone who lists a program that will no longer be funded, be it NASA, food stamps, or military bases; is correct. The people who go to work at these places, who use the salary earned to purchase basic necessities, who help other people; they will all be losers in a government shutdown.

A government shutdown will hurt literally millions of people. That’s why the last time it happened there was an enormous backlash against the party generally deemed responsible. That’s why those in power worked so feverishly to prevent it from happening again. They are well aware of the political consequences of letting it happen again. People on all sides of the spectrum are hurt by a government shutdown.

I must also speak briefly about why President Trump thinks a shutdown is necessary. He is upset he has to negotiate in order to implement spending policies. He hopes that the rules might be changed so he can autocratically implement budgetary items. This is, of course, a horrible outcome. The reason it is difficult to pass spending bills is because politicians must compromise with one another. The Founding Fathers did this intentionally. One of their main goals was to avoid a concentration of power in one person.

What would be nice is if the politicians voluntarily got together to cut wasteful spending. The deficit hole is far too large to solved with the sorts of cuts the current crop of politicians is proposing. There is no easy solution to the problem. It will take decades of fiscal restraint, careful management, and readjustment of priorities to get the United States back on sound monetary ground. I’m pretty skeptical it can happen.

That’s about it. The situation is not simple. There are benefits and drawbacks to a government shutdown.