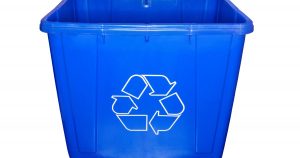 There’s an instructive story in the news today about a young entrepreneur/criminal named Brian Everidge who stole a plot from Seinfeld and tried to recycle some 10,000 beverage  containers gathered outside of Michigan. Michigan pays ten cents for each such container which is the highest price in the United States.

This refund fee is paid for when the original container is purchased by the consumer with a ten cent surcharge built into the price.

The idea behind the plan is to encourage people to recycle. This is government trying to get us to behave in a way they desire. It certainly has an effect as Michigan has the highest recycling rate in the nation. This number must be taken with some skepticism because clearly people like Everidge are bringing in containers from surrounding states and collecting the deposit, thus boosting the rate.

There is another side of this. Consumers are paying ten cents for every such container but about 10% of them are not being returned for deposit. So, what is done with this “extra” money? That’s where we start to see ulterior motives. 80% of the money is given to the state earmarked for the cleanup of polluted sites. The merchant selling the bottle gets the other 20%. That’s a lot of money.

In addition we make criminals out of people like Everidge. Certainly everyone who lives near the Michigan border takes advantage of the system to purchase outside the state and redeem within.

Proponents of the plan will point out that it saves the state money in cleanup and also helps the environment. That is completely correct.

I’m certainly not opposed to recycling nor blind to its cost benefits. My problem here is the ten cent fee has created thousands of criminals. This is a pattern we see everywhere in the United States. Laws which are designed to be helpful essentially create criminals and encourage criminal behavior. The result of the fee should have been painfully apparent.

I’m not going to offer alternative solutions here, of which I’m sure there are some. My point is we should not write laws that encourage people to be criminals, no matter the other supposed benefits.

This is how we end up with a police officers spending their time pursuing things that should not be criminal in the first place, how we alienate police from the communities they serve, how we create a prison population second to none in the world at an expense of $74 billion a year.

We should not be looking for more way to put people in jail. For laws that give people a financial incentive to commit crimes.

I recognize this is an isolated incident and a relatively minor law but I find it educational. This is a law that tries to encourage people to recycle but in fact encourages them to break the law.

Legislators, think hard before passing laws. We have far too many and the result is plain to see.