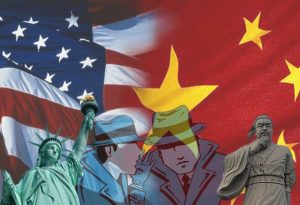 There is an interesting story in the news indicating that about seven years ago a number of spies, or assets as the CIA refers to them, were discovered by the Chinese government and imprisoned or executed. What I find interesting about the story is that the comments seem to be focused exclusively on trying to blame someone. I find this troubling.

I think there are a number of questions this series of events brings to mind and yet everyone only cares about using it to their political advantage. I shouldn’t say everyone, I’m sure the people in the CIA who investigated the case and others care deeply about the security of the nation and what went wrong. It can’t be good when most of the people they are trying to protect don’t seem to care at all.

What I think about is why we so want to gain political advantage rather than actually figure out what happened? Why are most of the commenters finding a way to blame Hillary Clinton and President Obama for what went wrong or, on the other side, assuming that the problem predated them and blaming President Bush. It’s all about how it’s the opposition’s fault and not about the actual problem. I have not read a single comment about the poor people who lost their lives. The families devastated by the breech. The loss of intelligence gathering capabilities and the threat this does or does not present.

Where is our humanity? If we are focused so sharply on destroying each other, what will happen to our nation? Will we grow more and more divided? Will the United States break up? I think these are real possibilities.

I also question the very nature of the operations that got those people killed. Is it really necessary to do all that spying? Certainly, China isn’t acting in the best interest of the United States. They have spies in this country and their software developers have stolen trade secrets and important information from the United States and companies that operate herein. Still, the reason all those people are dead is because we asked them to spy on China for us. Yes, they decided on their own to do it, but it sometimes seems so unnecessary to me.

What if we just left other countries alone? I know most people will say that we leave ourselves open to attacks if we don’t know what is going on in China, but I’m not as convinced that is the case in this connected world. It would be catastrophic for China to financially harm the United States. They are as dependent on us as we are on them, this is one of the most beneficial things that comes from globalism. When everyone is in economic partnership with one another, there is increasingly less reason to attempt violence.

If we didn’t have those spies, they’d still be alive. We’d also have a lot less government and a lot more money.

The reality is no one actually knows how the Chinese discovered the agents. The most likely answer is a spy working for the Chinese and embedded in the CIA. There is one suspect who it is strongly assumed revealed the identity of the various assets but there was never enough proof to imprison the person. Eventually the suspect was no longer given sensitive information and subsequently the ability of the Chinese to identify spies dropped off.

We will most likely never know how the security of those spies was compromised but the disturbing thing for me is that no one seems to care to learn that information. They just want to blame someone.