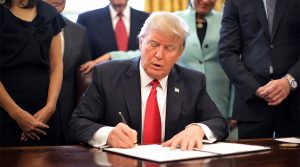 Off to Wikipedia where I found there are a series of other executive actions to be taken in situations that don’t meet the requirements of an Executive Order.

In this case, a Presidential Memorandum seems in order. The idea of this type of action is simply to manage the actions, practices, and policies of various departments. The big difference between the two is an Executive Order requires constitutional justification.

In the case of this particular action, it seems clear to me that a memorandum is far more appropriate. The President is simply asking staffers in a particular department to review trade agreements. There is no actual action being taken. So why the Executive Order?

The answer is quite obvious. President Trump loves sitting at a table, surrounded by sycophants, having his picture taken, and blustering away. I know his supporters are going to lambaste me for this position but I find the entire dog and pony show to be a bit tiring.
The entire justification for this Executive Order seems to be a photo opportunity.

I’m not saying a review of our trade agreements is a bad idea. I’m not commenting on the contents of the order itself. It just the necessity of the designation that bothers my sensibilities. It’s like using a sledge hammer to pound a nail. It brings my mind to question the ability of the Trump administration to properly diagnose issues, and that is troubling. If they consistently use a sledge hammer when a claw hammer is a more appropriate tool, it seems to me they are asking for trouble.

I know this is a small thing but for some reason it really strikes me. It’s a simple lack of understanding of processes and procedures. As a model, let’s look at Executive Orders comparing actions by President Trump and President Obama.

It is clear to me that far more memorandums should be issued than orders. Executive Orders should be reserved for situations in which they are appropriate.

I’m probably tilting against windmills here. There are certainly much larger issues to complain about with the Trump administration. That being said, knowing the right tool for the job is an important factor in properly accomplishing that which you set out to do. If you use the wrong tool, you’ll not often have successful results.

2 thoughts on “Why Executive Orders instead of Presidential Memorandum?”