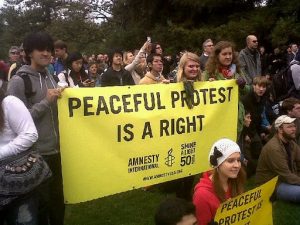 There’s an interesting case making its way through the courts about a woman who laughed during a Congressional hearing and is now facing charges of disruption. This is not an isolated incident. Authorities seem to be finding a plethora of creative ways to arrest protestors. Many of the arrests made at the Dakota Pipeline Protest were of this ilk.

The right of people to assemble and protest is guaranteed by the Constitution of the United States and when law enforcement agencies attempt to curtail this right, we must be wary. A totalitarian state does not brook vocal opposition. I’m certainly not suggesting we live in such a state, but every time I hear about dissent being squashed I take note.

Often times what we see in cases like this is that charges are completely dropped before the case gets to court or the charge is dismissed by a sympathetic judge. I think what is necessary to curb this tendency to bring charges against protesters under the flimsiest of circumstances is simply fines. For every such charge in which the case is dismissed, the person so arrested should be financial remunerated by the agent who made the arrest. It’s a relatively simple solution that inhibits those making the arrests and compensates the person so incarcerated.

I’d be particularly pleased if the arresting officer paid the fine out of her or his personal salary. When we fine the agency itself, the officer doesn’t feel any real pain. An agency might think it worthwhile to arrest a bunch of protestors and pay for it out of tax dollars some years down the road. It seems to me anyone looking at even a moderate fine for arresting a protestor on flimsy charges is going to think twice before moving forward.

As I stated at the top of this article, this is not an issue to be taken lightly. Our constitutional rights are at stake. If government agents are allowed to arrest people on ridiculous charges which are dismissed at a later date without penalty, well, there is nothing to stop such law enforcement groups from doing so in ever increasing numbers.

I take the right to protest quite seriously and so did the Founding Fathers. This is a right people on all sides of the political spectrum should embrace. It is almost certain at some time in the future you will want to protest some policy or person and the party in power will not want you to do so.

I’m well aware that some protestors are violent, angry, and disruptive. Such demonstrators should be subject to legal remedies, but I think it’s important to err on the side of caution. Our liberty is at stake. I’m willing to put up with some rudeness in order to be free. If someone yells out in a hearing or puts a foot beyond the barrier; we must accept her or his right to do so.

When we stop allowing people to protest peacefully, they will find other ways to express themselves. None of us want to live in a nation where the only method available to criticize your government is violence. When we justify arrests on the flimsiest of charges, we move our nation incrementally toward that end.