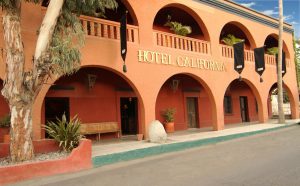 For anyone near my age, 52, the song Hotel California brings back strong memories. The song was an enormous hit for The Eagles in 1977. So, I was filled with curiosity when I saw members of the band have filed a lawsuit against a hotel in Mexico called Hotel California.

I’m also quite interested in all things legal and I find the case itself to be utterly fascinating. The Hotel California is a small hotel in Baja California Sur and had that name dating back to 1950. The hotel changed owners and names a number of times, but wily entrepreneurs began to market it under the original name in 2001. Using marketing campaigns and events at the hotel itself, they create an association between the establishment and the song.

The hotel was not the inspiration for the song and the band members feel as though their song is being used to falsely advertise the hotel.
Judging by the comments I’m reading in various articles about the lawsuit, opinions seem sharply divided. Some think it is a terrible overreach by the band while others think the hotel is clearly in the wrong.

Let me begin by telling you that I’m not a lawyer. My opinions herein are not based on a legal understanding of the case but upon a layman’s.

The hotel clearly has the right to use the name Hotel California. It was the hotel’s name long before the song. The Eagles have no right to stop them from using it. The lawsuit apparently simply wants the owners to stop using the false association. I’m guessing their argument is that people who stay at the hotel are disappointed it is not associated with the song and, perhaps, even blame the band for the misinformation.

It’s clear the hotel is creating a false association but that is not necessarily a crime. As the law says, Caveat Emptor. Let the Buyer Beware. The basic premise is that people have to take it upon themselves to understand the hotel is not associated with the song. They must spend the time to research this information before plunking down money to stay at the hotel. People presumably pay this money because they want the experience of staying at a hotel that was the inspiration for the song. Of course, it was not, but who is to blame for this mistake? The hotel or the traveler?

Yes, they are deceiving but have they actually lied? Do they claim the hotel is associated with the song or do they simply pipe in Eagles music, presumably for which they’ve paid royalties? Do they create an environment where the unwary might be fooled, but stop short of crossing legal lines?

Where is the border crossed between fraud and legal, but reprehensible, misinformation? I’m not sure but the entire thing is absolutely captivating.

While the legal case will likely remain in limbo for who knows how long, I think the events are a good lesson for all of us. Don’t assume something is true based on an impression. Pay careful attention to the exact words being used or written. We live in the Information Age. It is not at all difficult to determine the hotel and the song are completely unrelated. A short search on the internet can easily reveal this information. If you spend your money on the hotel assuming the relationship is there, when it is not, perhaps that is your fault.