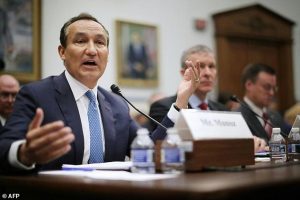 The recent spate of public incidents involving various airlines has motivated members of Congress to get up from dining room table and push away lobbyist provided meals. Why is this happening? Why can Congress yell at airline executives and tell them what to do? Don’t they have anything better to occupy their time?

Congress believes they have a right to intervene in this situation because airports are largely run by the government, particular small airports without a lot of traffic. All air traffic controllers are employed by the government. The FAA maintains a large degree of control over the entire industry. They make many of the regulations by which the airlines must abide. Therefore, they think they can instruct airline executives on how to properly manage their business.

All that being said, there is one simple explanation as to why Congress is holding these hearings. Members of Congress noted that lots of people were upset by the incidents and saw a golden opportunity to prove to their constituents they are doing something, not that they actually are doing anything. Hey, let’s yell at the bad guys and everyone will love us. What will be the result of all this shouting? Nothing that wouldn’t have happened anyway.

The reason airline executives are apologizing all over themselves is not because members of Congress are lambasting them. It’s because of the immediacy of social media and the power of the consumer. When nasty incidents happen today they are promulgated throughout the country within minutes. We the people now have far more information at our fingertips than it any time in the history of the world, and this changes the way we do business.

There is no longer a need for Congress to provide certain forms of oversight to the airline industry. Capitalism can now be wielded like a club in a way never before known. The ability of consumers to purchase the products they desire has always been a powerful driving force in the economy but in the modern age, this power can be brought to bear within hours of an incident.

This is clearly a situation where Congress need not get involved. The people have spoken and airline executives can either listen or not. This is simply a case of members of Congress acting like small children who want their mother to watch them leap from the diving board. It’s an opportunity to pretend they are doing something, and that enrages me.

There are plenty of serious issues they could actually be spending time trying to resolve. They could work together to try and find reasonable solutions to the problems that divide us. They could spend time in meetings with one another discussing various resolutions to complex issues. They could hold hearings with various parties and rationally discuss realistic ideas. They could prove they are mature adults working hard to make this nation a better place.

Instead they spend their time in what can only be called a dog and pony show. They think we are utter fools who won’t notice. I’m sad to say they’re probably right.

One thought on “Why Is Congress Grilling Airline Executives?”